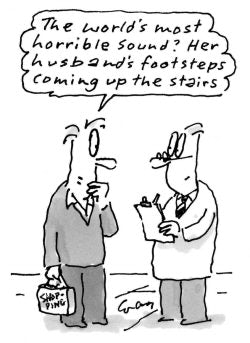 The poet who urged us to stand and stare cannot have worked in marketing. The daily pressures of deadlines, the tyranny of fax, phone and e-mail, the clamorous demands of customers (or, if you are in one of the newer, exciting businesses such as PR or hair extension, of clients), all conspire against those moments of solitary reflection which nourish the brain and kindle the spirit.

When, as another poet said, the world is too much with us, our thoughts are apt to transpose us into other, imagined occupations in which leisure and work blend so perfectly that they become a single, harmonious whole. Such, I imagine, is the world of academe. Who would not wish to exchange the swirling and perilous waters of commerce for the calm, limpid pool of learning? To muse alone in cloistered, ivy-clad seclusion, free from the pressure of time and with an income, though modest, secure, is the perfect life. Thus blessed by providence, the academic can focus the searchlight of his mind on minutiae, illuminating the small corners and dark recesses of life which the rest of us, in our helter-skelter pursuit of money and status, pass by, unknowing and uncaring.

Take Prof Trevor Cox of Salford University, who has through a calm and unhurried exercise of mind and application of intellect determined that “the most horrible sound ever” is the noise made by vomiting. It is a conclusion that you and I, enmeshed as we are in quotidian concerns, could never have reached.

Not that we should dismiss the professor’s work as being without practical use or application. His purpose, he says, is to “explore the public’s perception of unpleasant sounds and help inform the acoustics industry”. And possibly the marketing industry, too.

In fact, marketers already use unpleasant noise as a means of deterring unwanted customers. I am frequently turned away from shops and pubs by the warning sound of popular music, particularly of the fake soulful variety in which singers affecting an American accent whine nasily and repetitively on the vowels.

TV and radio stations are also adept at filtering out undesirable viewers and listeners such as myself by employing presenters whose estuary English sets the teeth on edge. Fortunately the sound of human vomiting is not something one hears often (unless you live above an inner-city pub and stay in on Friday nights) but it is indistinguishable from the voice of Janet Street-Porter.

TV dramas featuring young New York women are also intolerable. The physical appeal of the female is negated by her having had her adenoids narrowed and elongated by a process unknown to man (an academic thesis in this surely) with the effect that she makes a shrill noise through her nose similar to the mating call of the guillemot.

Prof Cox’s methodology was to post 34 horrible sounds on his website and invite people to list them in order of awfulness. A million votes were cast worldwide and second to vomiting came microphone feedback. Joint third were “many babies crying and a horrible ‘scrapping sound'”. Both of these invite further research: how many screaming infants must form a quorum before the combined rattling of their tonsils becomes intolerable; what is the nature of a horrible “scrapping sound” – is it the noise of two cats fighting or a typographical error?A potential flaw in this kind of research is that it cannot cover all the nasty sounds in our increasingly cacophonous world; nor can it allow for one person’s euphony being another’s noise. For example, it is now well documented that Mozart’s overture to Don Giovanni will unfailingly drive hooded youths from the urine-soaked underpasses which they haunt, to the annoyance of middle-class commuters making their way home fresh from yacking into their mobile phones in crowded railway carriages.

From a practical, marketing aspect, one of the implications of the research is that the benefits conferred by unpleasant noise might be limited.

Noting that baby cries were one of the few sounds that males found worse than females, the professor says, “It could be that females have become habituated to the sound of babies crying”.

How true. Could it be that, eons from now, some distant descendant of the Murrays will pull open the door of the Goose and Poker and stride unperturbed and heedless into the wall of sound? It is possible, though it will be the task of a cloistered academic yet to be born to determine whether the change was due to acquired immunity or evolutionary deafness.

In the meantime, if only our busy lives allowed the luxury of thought, we could ponder the paradox of an academic who, blessed with the chance of peaceful contemplation, thinks only of horrid noises.

Some cynics claim the ad industry is full of pirates and brigands, but workers aboard the good ship planning and buying had their timbers shivered last week when a crew of buccaneers raided agencies across London. The pirate hoard was press-gang…

Chupa Chups, the confectionery manufacturer, has appointed Propaganda to its advertising account, worth up to £1m. The Leeds-based shop won the UK business for the Cremosa and Fruitella brands after a two-way pitch with an undisclosed London agency. Propaganda’s managing director, Mike Phillipson, says: “Winning the business of a leading brand like Chupa Chups means […]