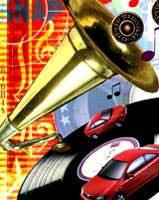 Sex and the music industry are old friends. Millions of songs allude to it, artists are moulded to become sexy and record companies use the notion of sex to sell records. It is easy to imagine that working with music is sexy. So, when someone drops into the dinner party conversation that they just happened to be “speaking to Robbie’s record company today”, it’s pretty impressive.

Over the past 20 years, using copyright music to help sell a product has become a popular option for many agencies and their clients. In a few seconds, a song can capture an emotion, a time and a message for the listener. Advertisers can piggyback on the millions of pounds that have already been spent in creating an artist and sound in order to take their brand directly to a specific target audience.

Young &amp; Rubicam head of television Tim Page firmly believes that advertisers are keen to employ “famous” music on commercials because it is often the quickest and most significant way to create a mood or tone that the viewer identifies with.

“Music gives people an easy-hit connection to that ‘good feeling’,” he says. “Tie a lyric in with the story of the commercial and the synergy is strong and memorable.”

But compared with, say, the cost of securing an international actor to give visual impact, securing and paying for music rights sometimes seems an unnecessary expenditure to the advertiser or brand owner.

The problem with music is that it increasingly seems to be a free commodity – after all, it’s available on the radio and Internet for all and sundry to copy. But don’t be fooled; when it comes to music rights, publishers and record companies are in fact far from passive.

Getting the legal rights to tracks can prove costly, as Page confirms: “The downside is often the money. Not that the deals aren’t competitive – it’s just that often the fees can be large, especially if the campaign is on a European or global scale.”

For example, securing the use of a piece of music for a pan-European campaign including TV, satellite and cinema could cost between &£300,000 and &£500,000.

EMI Music Publishing creative licensing manager Steve Hills points out that in recent years, more factors have come into play when an owner is approached to consider licensing a piece of music for a commercial.

These include the moral rights of the artist; whether the images used could imply a personal endorsement of the product; whether use of an old track by an artist could affect the release of a newer album; whether a “best of” album is pending; what other deals are on the table for that artist; and what else the brand is proposing to do with that song. And that’s just on a creative level.

“It is certainly no longer just a case of ‘show me the money’,” says Hills. “The contractual hoops, combined with the future integrity of the writer and artist, have become key factors in licensing for a commercial. Because an artist’s manager or lawyer has more control these days over licensing rights, getting permission to use a single song can take four or five tries before a deal is finally struck.

“In some cases, it is no longer feasible to suggest clearance within 24 or 48 hours – clearances can now take days, sometimes even weeks.”

David Wernham, manager of Des’ree and other artists, confirms the complexities involved in gaining clearance to use a piece of music.When it came to licensing music by Des’ree to advertise the Ford Mondeo, Wernham negotiated a three-year deal covering 30 European territories, for TV, cinema, radio, dealerships, motorshows, exhibitions and Grand Prix. “This creates massive exposure opportunities, which can only be good news for everyone,” he says.

“The right music licensing deal with an internationally renowned artist can create powerful and relevant cultural associations for a product with the consumer.”

From a legal point of view, the picture is highly complex. Old masters change hands regularly and several record companies may own the rights to a particular version of a track. Contractual paper-trails of ownership or artist/musician’s involvement may be missing.

Copyrights may be sub-licensed between the territories, with the original publisher or record company unable to grant rights in certain territories, leaving pan-European campaigns fragmented.

To make things even more complicated, registration of rights with the individual organisations is slow and is not totally dependable on a worldwide basis – song titles do not always translate exactly.

Another dimension is sampling, whereby music producers take different aspects of an existing song, for example the drum beat, and use it within a track to enhance the final product. In this art of modern music production, copyright often relies on the honesty of the producer.

But very often, particularly in the process of making an entire album, the producer may not remember where he sampled certain sounds. In such cases, the rights owners simply may not know that a song has been sampled. However, one thing can be relied on: as soon as an ad goes on air with an uncleared sample, the legal posturing between the parties will begin.

The Internet, meanwhile, has opened up a new set of challenges. The Web simply doesn’t recognise territorial boundaries. Licensing from source in the UK may not apply if the commercial is picked up via ADSL in a foreign country, for all the reasons above, and more.

In addition to all this, record companies and publishers may limit their responsibility for any copyright issues in countries beyond their control, since it is difficult for them to keep track of the contractual paper trail behind each of their artists’ music.

Andrew Forbes, partner at media law firm Statham Gill Davies, says: “Licensing music can be tricky. Even if you have a system in place to make sure that your licensing works properly (and many agencies don’t), you can still come unstuck.

“Irate copyright owners have no hesitation in threatening to injunct your campaign just as it is about to go on air. You should also have recourse against the person who licensed the music to you – but if they have limited the compensation you can claim from them, or if they are a small company with unlimited liability and cannot pay the claim, this may be small comfort.”

The cost of claims

Last year, a leading media insurer handled over &£100,000 of claims for music copyright infringement in one month. Many of these claims were settled privately, so as not to affect insurance excesses or next year’s premiums.

Very often, the brand using the music knows nothing about such complications. No agency wants a client to know that there has been mismanagement of a production process.

So what is the music industry doing to help make licensing music easier for the marketer?

To some extent, the music business has its hands tied, as it would be impossible to review every single contract. However, it is doing its best to keep up. Record companies and publishers have welcomed an initiative called the Contingent Music Indemnity (CMI), which does exactly what it says on the box: it covers agencies and their clients for unpredictable claims that may come out of the woodwork from the use of a music copyright.

For one per cent of the total licence fee, the agency is covered for up to &£1m per claim, plus legal fees with no excess, before it goes anywhere near the agency’s errors and omission department.

This concept is the brainchild of specialist media broker White &amp; Wilson. Managing director Deborah White says: “The most dangerous time is the moment a commercial goes on; this is when there is maximum exposure around the rights.

“The CMI is designed to cover breaches of intellectual property rights, which can arise on the music synchronisation licence despite everyone’s good intentions”.

Despite the legal complications, the fact that music continues to be such a popular choice for many brands – with more and more artists giving permission for tracks to be used in commercials – suggests that a good track does help to sell a product.

Perhaps the last word on music choice should go to the person in charge of the brand – after all, this is the man or woman who signs the cheque.

Marcus Strobel, marketing director of Procter &amp; Gamble Fragrances Worldwide, is a great believer in finding the perfect piece of music to enhance his brands.

“Music can drive an advertising idea and when that idea is right, I am prepared to pay for it,” he says. “However, I appreciate that there is a very complicated web of publishing and recording contracts behind my choice of music, and that securing those rights can be very complex. Every time I use a piece of copyright music in a commercial, about 20 per cent of me is very nervous.”

The moral of this story is, if you want to get into bed with the music industry – which can be a very pleasurable experience – make sure you have the right protection.v

Somerfield has withdrawn from the loyalty scheme Premier Points run by Argos, after deciding to drop all loyalty schemes and resume price-led promotions. The company announced in its interim results yesterday (Tuesday) that it has “given notice to end our Argos Premier Points loyalty scheme in order to provide our customers with more immediate focused […]

Capital Radio’s alternative music station Xfm has joined forces with MTV2 and music magazine Metal Hammer to launch a new rock music show for the TV channel. “MTV2 presents the Xfm Metal Hammer Riot” is an hour-long weekly programme to be launched on February 1 at 10pm. It will be presented by Xfm DJ’s Claire […]

Walkers Crisps has created a website to encourage children across the country to display their schoolwork online. The site, called Walkers Showcase, has been launched following the success of the Free Books for Schools scheme, which began in 1999 with the backing of News International. Five-times Olympic gold medallist rower Sir Steven Redgrave is also […]