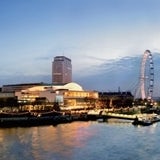 The South Bank Centre, the London arts hub that includes the Royal Festival Hall, Hayward Gallery and Queen Elizabeth Hall, is seeking agencies to handle its media buying and assist with creative work.

The business is likely to be worth up to 2m and the centre is in the process of drawing up a shortlist following a tendering process. South Bank Centre director of marketing Honor Wilson-Fletcher is overseeing the appointments, and the successful agencies will work closely with an in-house team.

A spokeswoman for the marketing department says the search will focus on media agencies, but adds the centre is also speaking to shops that can handle both media and creative work. Media has been handled by Dewynters for the past three years.

An ensuing marketing campaign is likely to feature press, outdoor and online work, as well as tactical promotions. Executions will focus on drawing in different consumer groups to the area, which is on the south bank of the River Thames, next to the London Eye.

The centre is undergoing a modernising programme. The Royal Festival Hall is currently closed for redevelopment. Wolff Olins has already been drafted in to oversee a rebranding programme.

The spokeswoman adds: “We wanted to review how we have been working, in terms of market development and defining our business goals.”

Wilson-Fletcher joined the centre last year from the British Museum, where she was head of marketing.