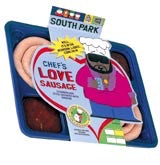 South Park, famous for its foul-mouthed schoolboys, is to be featured in a range of ready-made meals.

The meals will be in supermarkets from February and if successful the range could be extended.

The Licensing Company director of entertainment licensing Lisa Shapiro controls licensing rights in the UK, and claims merchandise sales of more than £300m.

She adds: “We have tried to reflect the cartoon’s originality and hope the move into food products will continue the success story.”