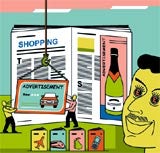 A year ago it would have been impossible to imagine, but the truth is that the customer magazine market is belatedly experiencing the same jitters that the rest of the marketing communications sector has been getting used to for at least a year now.

Last year, a Mintel report predicted that the sector would grow by nine per cent a year until 2004, when it would generate revenue of &£319m. But individual publishers are now less optimistic, and the recent merger of Citrus and John Brown Publishing is not expected to be the last piece of consolidation.

When times are bad, according to Communications Team chief executive Mark Flanders, clients begin to see contract publishing as a revenue stream rather than as a marketing tool. He says: “The same thing happened ten years ago. When things get tight, people’s true colours emerge.”

What happens is that clients realise that advertising revenue can be gleaned from contract publishing and their eyes light up. What should be viewed solely as a marketing tool is suddenly seen as a money-making venture.

Association of Publishing Agencies (APA) director Hilary Weaver says this attachment to advertising revenue is becoming a worrying trend: “We are seeing a growing number of clients, new to the industry, who say they want a magazine that will achieve all the marketing objectives set for it, but they don’t have the budget to do it. They want the magazine to be paid for by advertising.” Sometimes, clients even want their magazines to make a profit through advertising.

Most publishers say it is difficult to make money from advertising revenue and only airline magazines have ever really managed to do it.

Axon Publishing editorial director Paul Keers says: “Rumour has it that, in the past, some magazines made money out of advertising revenue. Those would have had to have been in-flight titles, and that would have been before the end of European duty free, when airlines could force duty-free products to advertise in the magazine. But now, the figures just don’t add up.”

Pie in the Sky

Weaver says that it is not in the interests of publishers to promise great things from advertising. But many of those who are not involved in the current pitch for BSkyB’s customer magazine believe that is just what the next incumbent will have to do.

One publisher, who does not wish to be named, says: “The margins on the BSkyB contract are squeezed every time the work is reviewed. It wouldn’t surprise me if the next publisher is expected to make money out of advertising.”

Another publisher agrees, saying: “The publisher that gets the BSkyB business will be the one that has promised advertising revenue.”

The worrying thing about this is that BSkyB is a large, long-standing contract publishing client and should know better. If it is demanding revenue from the magazine, why shouldn’t smaller, less experienced players do the same?

And because times are tight, it is likely that publishers will bend to even the more extreme demands of clients.

Grahame Lake, chairman of the APA and managing director of Just Customer Communication, says that the current climate is forcing some publishers to “conclude business today which they will regret in a year’s time”.

He says: “Advertising revenue is completely immaterial in this sector. If you are publishing your magazine for the right reasons, the minor bonus that you may get from ad revenue is unimportant.”

Flanders believes that some contract magazine advertising could even damage the client’s brand: “Many magazines justify their costs by pointing to an increase in loyalty or service usage from the customer. Third-party advertising should be there to complement the brand, not to justify the whole project. The last thing you need is an agency that puts inappropriate advertising alongside your carefully considered messages just because it is desperate for the money.”

But, at the moment, many clients are desperate for money and so even those clients who do understand the real value of contract publishing are beginning to treat publishers more and more like other marketing communications providers.

Jackie Newcombe, managing director at Cube 3, the contract publishing division of Associated Newspapers, says the recent expansion of the contract publishing sector “was always going to be difficult to sustain in what is a young market”. One of the results of this has been that “pitches are becoming more competitive than ever before. Clients know that there is a great deal of choice and some are playing the field.”

“In one recent tender, ten companies were asked to pitch. A great deal of work was required, which would be costly and time-consuming. After a great deal of soul-searching we declined to pitch, but we were the only company that did. The result? The business remained with the incumbent at a reduced fee.”

Unnecessary pitching is also costing publishers a lot of money. Weaver says that pitches cost an agency &£10,000 to &£15,000. If you consider that ten agencies may be pitching for one piece of business – that’s a lot of money going nowhere.

The APA recommends to clients that they do not invite more than four or five agencies to pitch. But in the current climate it would be a brave publisher that turned down an opportunity. It is sometimes also difficult to sift out benchmarking exercises from the genuine pitches.

But maybe agencies could be helping themselves more. Flanders says pitch lists are so long because, as soon as an agency finds out a piece of business is up for grabs, it does everything it can to get on the pitch list. This behaviour is not surprising even in good times. However, at the moment, according to Lake, there are few new clients in the contract publishing market and so any piece of business is likely to be furiously fought over.

But this urge to make money out of advertising and to force publishers to repitch for business in order to hammer them down on price is part of a more fundamental problem, according to Lake.

He says: “Sadly, all this is indicative of the fact that as an industry we have not managed to place our publications at the centre of marketing. We are still on the edges of clients’ thinking and that needs to change. Can you imagine clients wondering if they could make money or offset the costs of a direct marketing campaign? It would just never happen.”

But publishers themselves have been guilty of seeing customer magazines as a money-spinner.

Newcombe says: “The last two years have been a rollercoaster ride for the contract publishing industry. Buoyed by market value growth of more than 20 per cent between 1998 and 2000, the sector became a magnet for start-ups and big publishers. And when the advertising market started to dip, many larger companies saw contract publishing as a much-needed source of new revenue.”

Obviously those hopes have now been dashed.

Contract publishers may look back at this stage as a time when they were forced to enter the real world of cruel clients, forced mergers and a paucity of business. This may be no bad thing, as it obliges publishers to fight even harder for their share of the marketing budget and attention – something they have not been doing enough of, according to Lake.