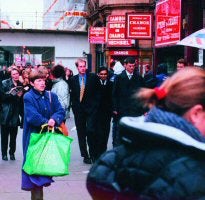 In 2005 the value of high street sales declined – the first such occurrence in modern times. Despite being the most important retail channel – achieving sales of £122.3bn – and accounting for just under half of all retail expenditure in 2005, the high street has struggled in the face of intense competition. In 2005, shoppers spent £767m less in town centres than in 2004.

This means that for the third consecutive year the town centre underperformed all other retail channels. The last thing needed by the industry is even more space. Nevertheless, that is exactly what it is going to be getting.

An unprecedented wave of shopping centre construction is set to create even more retail space in towns, just as competition from online and out-of-town retailers is intensifying. While this is good news for expanding and profitable retailers – and for consumers who will have access to a better range of retailers – trading conditions will remain very tough for retailers that are already struggling.

The industry had grown complacent on the back of easy, physical growth. Now it faces a trading environment in which selling prices are falling – great news for customers but a nightmare for stores.

Weak consumer confidence and spending has compounded this. A number of factors have conspired to dampen demand. Weak earnings growth has coincided with soaring energy prices, squeezing consumers’ disposable income and their interest in spending. In addition to weak demand, high street retailers face substantial cost pressures, which are taking their toll on margins. In 2005 rents typically increased by 3.6%, the highest increase for six years. Upward pressure on wages has been driven by another hike in the minimum wage.

To cover such cost increases retailers need to boost volumes, but with shoppers in a cautious mood this will prove challenging. The most effective way to achieve this will be to lower prices, but against a background of cost increases, the scope to do this profitably is very limited.

The dangerous combination of weak demand, deflation and escalating costs is resulting in a lengthening list of retail casualties. Over the past 12 months, 12 major retailers – accounting for 3.9 million sq ft of town centre space – went into administration, were put up for sale, or closed.

The high street is continuing to lose share to out-of-town. Grocers’ continued push into non-foods has easily offset a temporary weakness in trading at DIY and furniture retailers hit hard by the slowdown in the housing market. By increasing their non-food ranges, grocers have capitalised on large store footprints and strong inherent footfall attracted by their core offers, enabling them to capture sales from high street retailers. The out-of-town arena has also benefited from consumers avoiding high-profile shopping areas – such as London’s West End – in light of security fears.

A surge in popularity of online shopping means a progressive loss of sales on a second front. In 2005, falling broadband costs and rising broadband penetration served to boost online sales by 28.9% – over 15 times the pace of total retail – enabling online to capture almost half of the cash increase in retail sales. Many high street retailers have also used the medium to expand their offer, recompense for some suffering lower town centre sales. Nevertheless, this has caused problems, with sales cannibalisation an issue.

A wave of new space is poised to flood the market: by 2010 over 30 million sq ft of new shopping centre space will have seen the total high street space increase by 6.1% over five years, compared with a 0.9% decline during 2000 to 2005.

Retailers must ensure the cost of new space is justified by demand. In the current climate, retailers remain cautious in their commitment to expansion and are wary of paying premium rents to locate in flagship shopping centres they cannot afford.

This space could ensure the high street stems its loss of business to competing channels. Modern shopping centres offer security and a comfortable environment under one roof. However, with more and more space, and a flat outlook for demand, the intense competition that characterises retail today can only intensify still further.

This is becoming more of a buyers’ market every day. Retailers in Britain have for years tended to be judged by how profitable they were. Moving forward, their selling skills will increasingly come to the fore. Attracting and retaining customers will become paramount.