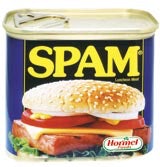 Hormel, the US food company that owns the iconic luncheon meat brand Spam, has applied for a European trademark to use the brand name for a range of computer and network services, including one designed to suppress unsolicited commercial e-mails – better known by the slang term “spam”.

If the application were granted, it is unclear whether Hormel would be able to stop anyone in the European Union using the term “spam” to refer to junk e-mail, or whether its rights would be restricted to junk e-mail suppression software.

According to Hormel’s official Spam website, spam.com, the company has for some time been concerned over confusion between its Spam product range and unsolicited e-mails. It acknowledges that it can do nothing to stop the use of the word spam as slang for “junk” e-mail, adding that one of its major worries is that many children will learn the slang term before they become aware of its products. It says on the site: “Ultimately, we are trying to avoid the day when the consuming public asks, ‘Why would Hormel Foods name its product after junk e-mail?'”

In the US, George Lucas’ company, Lucasfilm, went to court to try to stop people calling Ronald Reagan’s anti- missile defence shield programme “Star Wars”. Lucasfilm lost. The court ruled that companies which own particular trademarks cannot stop others from using them as slang for something that has nothing to do with their trademarked product or service. But at the same time, the US courts accept that such slang use does not weaken the trademark owner’s rights.

Carat has won the Â£10m media planning and buying account for Saga Group from incumbent Mediaedge:CIA.

Shell has appointed WPP Group agencies MediaCom and Maxus to handle its $244m (&£134m) global media planning and buying account. The agencies pitched under the name Team Media for Shell, beating Initiative. It will be the first time the two agencies have worked together following WPP’s acquisition of MediaCom’s holding company, Grey Global, this year.

Bmi head of marketing Amanda Burns is leaving the company at the end of the month after taking voluntary redundancy. She does not have a job to go to. The airline’s commercial director, Adrian Parkes, will take over her responsibilities, and will oversee the marketing operation before deciding whether to appoint a direct replacement or […]