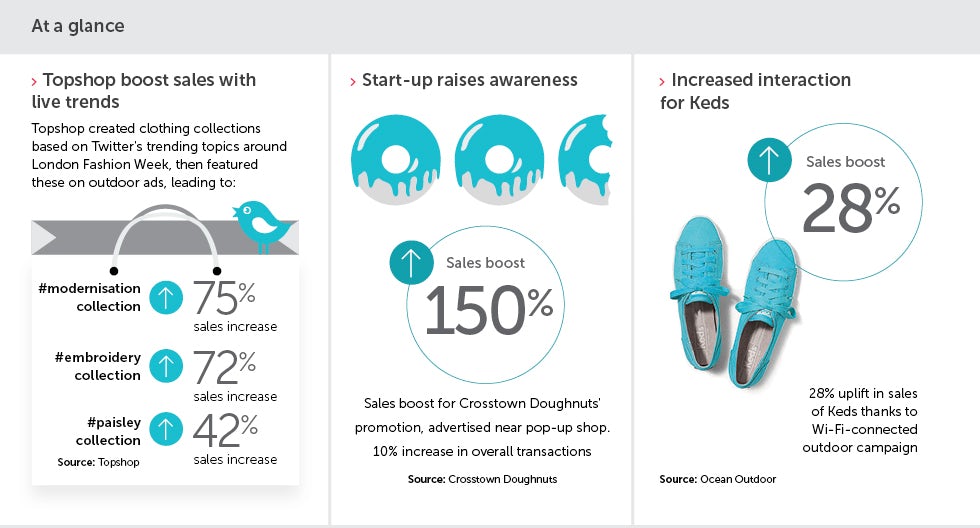 One way retailers are looking to bridge this gap is by using real-time data and principles of behavioural economics to increase the relevancy and timeliness of well located out-of-home ads, to nudge consumers into action.

“With technology and the sense of immediacy that everybody has now, it is really shifting customers’ behaviour and influencing what they want and when they want it,” says Sheena Sauvaire, global marketing and communications director at Topshop.

In order to meet consumers’ ever-more urgent demands for the latest looks and “democratise the fashion industry”, the retailer joined forces with Twitter during London Fashion Week last month to analyse data and identify trending topics as they emerged from the catwalk.

These trends were then displayed almost immediately on digital billboards in London and other key UK cities, all of which were within a 10-minute walk of a Topshop store.

Taking inspiration from the trending topics, consumers then had the opportunity to tweet the retailer with a hashtag such as #modernisation or #paisley to receive a curated collection of looks and products that fit in with that trend and could be purchased in store or online immediately.

“As Twitter is such a public and conversational platform it enabled us to get customers to the heart of the conversation so they could feel the excitement of fashion week and hear what people were talking about on the front row,” says Sauvaire. “We wanted to take it one step further, though, and get customers closer to actually shopping those trends immediately. The reaction was enormous.”

Indeed, over the three-day period that the campaign ran, sales of products included within the #modernisation trend lifted by 75% compared to the week before the campaign, items that featured as part of the #embroidery collection rose 72% and products that were grouped together under the #paisley trend increased by 42%.

“Customers want to be part of the conversation. They no longer feel that fashion week is just a trade event but something to really be inspired by; they then want to turn that inspiration into a real ‘buy now’ moment,” says Sauvaire.

This is the first time Topshop has used data and collaborated in this way on a campaign of this kind, but it is something the retailer plans to use again in future in order to keep up with consumers’ changing shopping habits.

“We really have to think about how we serve products to customers so we are reacting to what’s going on in the world and in specific cities right now, as opposed to giving them something that might [not be available for] months,” Sauvaire says, referring to the fact that fashion trends take six months to get from catwalk to retail stores.

Topshop will now be looking at how it can move this trial on and potentially apply it to other occasions that enable it to “bring a customer into an event or a certain moment in time and then turn that into a real shoppable piece of content,” she adds.

JP Then, co-founder of Crosstown Doughnuts, agrees: “It’s about getting that instant reaction from people which pushes them to come into your shop when they never would have done so previously.”

The start-up food brand, which Then launched with Gourmet Burger Kitchen founder Adam Wills, began life as a market stall last May before opening its first pop-up shop in Piccadilly Circus three months ago.

In order to increase awareness and drive footfall to the store, the brand used live point-of-sale (POS) data to see exactly when the store was quiet, enabling it to push out a timely promotional ad to screens in the station, thanks to a tie up between Exterion Media, Transport for London and POS specialist Shopwave.

“I can see instantly when there are peaks and troughs whether I’m in a store or not,” says Then. “So in theory, if a particular product isn’t moving at a certain store you could activate an ad related to that shop and specific to that product, while in another store you could have another ad for a different product. That’s where I see the opportunity.”

Throughout the course of the three-week trial, overall transactions at the pop-up shop grew by nearly 10% and sales of the promotion itself – a deal for a coffee and doughnut for £3.50 – increased by 150%.

“We experienced immediate footfall whenever the ad was displayed,” says Then, who believes that the campaign’s success is down to the fact it was “instant, timely and relevant to the direct environment”.

Although Crosstown Doughnuts, which also has concessions in Selfridges and Whole Foods, witnessed an immediate rise in sales whenever the ad was pushed out during the campaign, Then reckons the benefits have also been longer-lasting.

“Even though people might have seen the ad in the afternoon [when the store was quieter], many came back the following morning to enquire about whether the deal was still on,” he says. Plus, even though the campaign only ran for three weeks, he says “we’ve made a lot of regular customers so we are still reaping the benefits”.

Because the store was new, Then does question whether a second run of the same campaign would have quite such a large impact, as consumers are now aware of its existence, but he is exploring options for when the brand opens its first permanent store in Soho later this year.

“It will be interesting to see what the peak times are for this shop because it’s in a completely different location, it’s above ground and the area is already busy,” he says. “I think we’ll find our feet, see where there might be some lulls and then we’ll drive campaigns to target people at those times.”

Being able to gauge the immediate impact of a campaign is also a major benefit for brands, according to Noah Bernard, lifestyle group brand director EMEA at Wolverine World Wide, which owns the Keds shoe brand.

The brand was able to quickly measure the influence of a targeted campaign it ran at Westfield London thanks to the wifi-enabled Ocean Outdoor site it used. Consumers were alerted on their mobile phones to the availability of the wifi as they walked past, and when they connected they were given the opportunity to download a 20% discount code which could be redeemed immediately at retailer Schuh.

“Even though the Keds brand has been around since 1916 we are relatively new to the European and UK markets; people have a notion of who we are but they are not that familiar with the brand,” says Bernard.

In addition to alerting consumers to where Keds can be purchased, the campaign was designed to promote its relationship with pop star Taylor Swift, while engaging consumers through mobile and social media.

“Our goal is to drive more sales but we also have an obligation to raise brand awareness so we thought this is the type of activity would be a great avenue to reach our tech-savvy 18- to 24-year-old consumers,” adds Bernard.

As consumers had to connect to the wifi network to download the voucher, Keds was able to measure how many people interacted with the brand as a result, revealing a 28% uplift in sales. Keds will now feed what it has learnt about customers from this campaign into upcoming marketing activity ahead of Taylor Swift’s UK tour in June.

Advertising within close proximity of where the product or service being advertised is available can also encourage a more immediate response. Rio 2, the animated movie by Blue Sky and Fox Film, was able to increase the relevance of its OOH communication by using live updates that incorporated a dynamic feed to show cinema screen times by individual location.

The ads also took into account local weather information, so depending on whether it was sunny, rainy or cloudy a different ad would be displayed. The video sites operated by Outdoor Plus and Liveposter displayed scenes from the movie alongside targeted content, for example: ‘It’s a bit cloudy in Glasgow today. Time to go to Rio. Next 3D viewing at Cineworld Renfrew St: 4.30pm.’

As the examples demonstrate, various technologies are now coming together to make outdoor advertising a dynamic medium able to influence consumer behaviour and achieve specific marketing objectives in real-time. The growth in digital outdoor screens, coupled with mobile location data from sources such as beacon sensors, is a potent mix that is capable of delivering immediate sales.

Three ways data can be used to enhance footfall

Using real-time data means ads in particular sites can be tailored to meet specific needs. JP Then, co-founder of Crosstown Doughnuts, says: “If you can see live sales data for each of your stores you can choose which ads to put where based on the supply and demand you currently have in shops. Coffee might be selling well at one store so we could look to push a doughnut ad but in another store it might be the other way around.”

As the urgency of the latest trends increases, brands can pull in live data to feed consumers’ desire for fast fashion in locations where they can make an immediate purchase. “We have an immense amount of data available through digital platforms but we need to mine it and [uncover] trends that become shoppable,” says Sheena Sauvaire, global marketing and communication director at Topshop.

Link outdoor with other channels

Linking outdoor campaigns with other channels such as mobile and social media can help extend the reach of a campaign, according to Noah Bernard, lifestyle group brand director EMEA at Wolverine World Wide. “Ahead of [Keds’ brand ambassador] Taylor Swift coming to London we wanted to build momentum around the brand, which we were able to do by linking OOH with our retailers as well as incorporating a social media component because of the mobile application on the screen, which was a perfect combination for the brand,” he says. 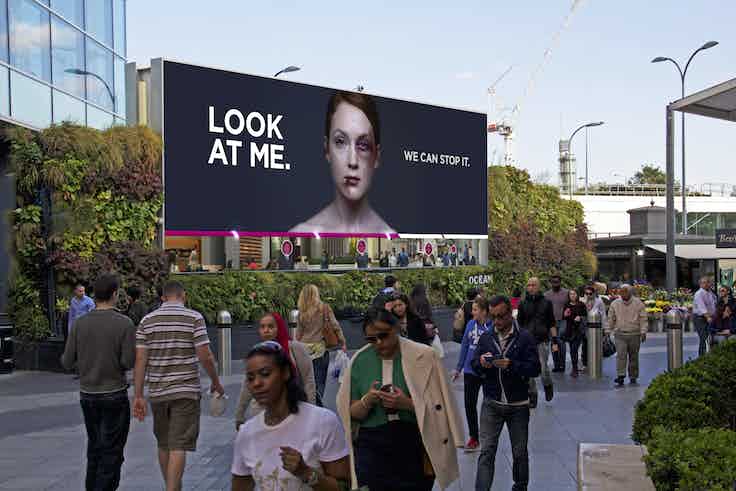 Women’s Aid will debut a new interactive billboard in Canary Wharf today (March 5), which features the image of a bruised woman’s face with the tagline ‘Look at Me,’ as part of a new emotive campaign to tie in with International Women’s Day (March 8). 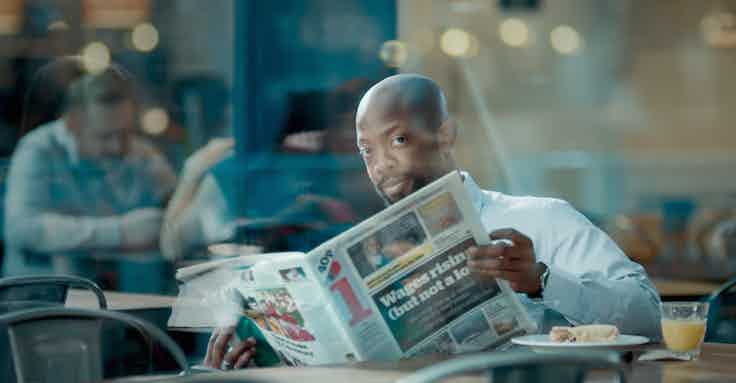 The Independent’s sister newspaper, ‘i’, will be launching a campaign that uses programmatic technology to present real-time ads that are in line with the news of the day, as they attempt to highlight ‘i’s ability to help readers ‘get to the point’ with its short-and-snappy material. 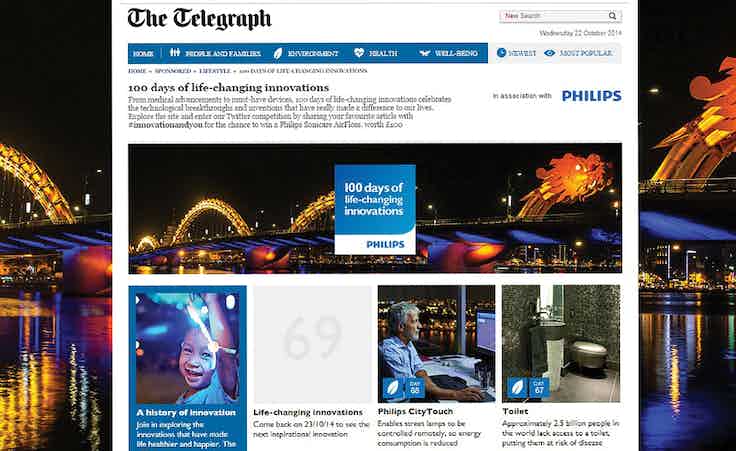