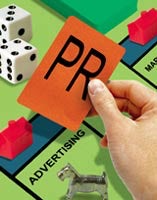 Spin is synonymous with politicians presenting news tailored to reflect well, or at least less badly, on themselves. By the same token, spin – or good, tactical use of public relations (PR) – can often be marketing’s equivalent of Monopoly’s “Get out of jail free” card. However, when economic times are tough, it is often a company’s public relations budget that is the first to feel the cold steel of the executioner’s axe.

According to a survey carried out among 200 marketers by recruitment consultancy Joslin Rowe – a member of the Blomfield Group – some 42 per cent of marketing departments had experienced a cut in spend in the wake of last year’s attacks on the US. The survey also found that when the marketing budget is being squeezed, 55 per cent of companies cut the PR budget first.

So if PR is seen by many companies as a good place to save money, why are PR companies or departments employed in the first place? And what can PR agencies do to retain, or even attract business, when budgets are being slashed?

Steven Bell, manager of Joslin Rowe’s marketing division, says: “It is clear that despite cuts in some budgets, companies realise they need to invest in marketing, and this survey highlights the importance of PR as a way in which companies can maintain a high public profile, while keeping costs relatively low.”

Veronique Attas, account director at The Media Foundry, which specialises in creative PR, brand building and proactive media placement, agrees: “You could argue that no matter how big you are, if you’re not out there shouting about what you’ve got to offer, you will lose out to the competition. And this is particularly true in times of crisis. When revenue is scarce, a company needs to be even more visible than in good times.”

Attas believes that not only are marketing and PR important to a company’s survival during hard times, but that cutting budgets can impair the crucial ability to prevent bad publicity. She says that when a crisis occurs PR should never be about whitewash and flannel, because bad news always gets out eventually. Instead of rigid news control, she thinks that a good PR department or agency will work hard to put bad news into context. “There are bad news stories that the consumer needs to know about. Being honest and upfront about them can reflect well on a company. On the other hand, there are bad news stories that aren’t particularly interesting to the industry or to consumers, but will harm the company or dent its image. Often harmful news stories get out that have no impact on the company’s ability to provide good service or deliver a good product. So the consumer isn’t necessarily going to be any better off for knowing them,” she says.

One way for a company to lessen the impact of bad news is to be transparent, by putting the news out before someone else gets hold of it. But Attas warns: “The worst thing you can do is to try to force journalists to do things, because they’ll often do the opposite. News manipulation is not what good PR is about”. Attas cites Jo Moore’s idea of burying bad news after September 11 as one infamous example of poor media control. She explains that working well with the press ensures that journalists get good stories, and that clients get good representation: “If you have a good relationship with a journalist then bad news stories should never happen without being placed in the right context.'”

But there is more to PR than damage-control. Pilot PR director Jane Herbert says: “PR is concerned with managing reputations – helping to project a positive image for a corporation or brand. In hard times, when consumers might feel nervous or vulnerable, they are inclined to turn to brands they know and trust, so times of recession can be a real opportunity for some organisations.” When the economy looks uncertain, she says, companies should demonstrate that their brands provide stability in an unstable world.

Media Foundry managing director Peter Law agrees, stressing the importance of taking a positive attitude during a downturn. One of the most important factors, he says, is remembering what the core values of your company are: “The first thing you need to be is positive. A lot of companies get very negative in a recession. They need to ask themselves two things: ‘Why are we running our business? and ‘What is it we do that is better than anyone else?’ This is something they have to be clear on. When times aren’t so good, a business can face a lot more competition.”

In a recent speech to creative businesses, Law used the example of easyJet to highlight the importance of core values. He said: “EasyJet was faced with a meltdown of its business after September 11, because no one wanted to fly. What it did was to focus on its core proposition – cheap flights – and make them cheaper, practically giving them away. It then created a massive PR campaign around the promotion. Within weeks easyJet was filling its planes, and its share price doubled within about two months.”

The board doesn’t understand

Joslin Rowe’s survey also points to the fact that marketing budgets are largely controlled at board level, and rarely by marketing departments themselves. This makes them prime targets for budget cuts. Law says: “Often the financial director will ask: ‘Why do we need to do this PR stuff?'”

The research adds that 35 per cent of marketers who do find their budgets cut cite this as a reason for leaving their job.

Bell adds: “It is clear that uncertainty in the market and cuts in budgets have prompted many marketers to start looking for another job.”

If budgets are cut without consideration, staff morale – and in turn a business itself – can suffer. As Law says: “Staff morale is the most critical thing you have to think about in a recession, because whatever you do, the people in the company are the most effective promotional tool you have.”

Law believes that in order to maintain customer confidence in a company, the staff need to feel confident too. If staff feel uncertain about the state of the company they work for, this will reflect in the way they react to clients. He says: “The first thing that happens in a downturn is that people worry about their jobs. Salaries get frozen, bonuses get cut and morale drops. One of the most important things you need is an internal PR strategy. It is important that you have an open dialogue with staff. If you’re honest with them, they will stick by you, but you can’t stop people from leaving. If you neglect internal PR, more people will leave and you chances of winning new business will be diminished.”

It is important that PR professionals make the most of the opportunities created by a downturn. Brady says: “The two best ways of attracting business are by genuinely he

lping clients to build their brands and generate sales, and by benefiting from client-to-peer endorsement. For too long, the PR industry has pushed itself to the edge of the marketing inner circle by being unable to support the tactical elements of a campaign. Understanding brands and how to develop them is no longer just the prerogative of above-the-line agencies.”

As is true with any business during a downturn, concentrating on core values is key. In order to win new business, PR companies must concentrate on what they do best, which is highlighting what their clients do best. The danger is that by focusing on winning new business it is easy to neglect existing clients. Law warns: “One of the first mistakes a business can make in a downturn is to start frantically looking for new customers. The first thing you have to do is look after your core clients – that way they will stay with you and that is where your external promotion efforts should start. What a lot of companies do in a downturn is reduce contact with their core clients, because they are concentrating on new business – the problem there is that in a downturn your clients need to know they are getting value for money.”

There for the good things too

In a downturn, PR is useful not just for damage control, or news management, but for highlighting the positive aspects of a business. It can be used, as in easyJet’s case, as a promotional tool that offers a definite return on investment. It can also be used internally to bolster staff morale and create a sense of wellbeing within a company that will reflect positively in that company’s search for new business. In a direct sense, PR can highlight the success of a company in the face of adversity, despite any negative publicity it, or its market, may have received.

The main strength of PR agencies is their ability to communicate, not only by placing bad news in context, but by convincing their clients of the opportunities available in a downturn. It may no longer be specifically about brand-building and promotional stunts – although they are still important – but the realisation that things are not always as bad as they seem. PR is not spin, it is not crisis management – it is about communication, realism and transparency. If these aspects are neglected, the reputation of a company may crumble.

As Herbert says: “Cutting PR to save money is a false economy. Reputations have to be actively managed, profiles have to be maintained. If left to their own devices, reputations will be managed by people who do not always act in the way an organisation would wish. A good reputation is one of, if not the most, valuable asset to an organisation, and companies should not take chances with it.”

Mobile content provider Vizzavi is backing the launch of its advanced ringtone collection through a joint promotion with handset manufacturer Samsung. Samsung has introduced two handsets that contain so-called “polyphonic” technology. This allows ringtones to be made up of more than two or three notes. Vizzavi, jointly owned by Vodafone Group and Vivendi Universal, has […]

Despite a downturn in advertising revenues, the Internet has bucked the trend – partially because of clutter in other media, says Danny Meadows-Klue

Siemens mobile is to sponsor Ant and Dec’s new ITV1 prime-time entertainment show, Saturday Night Takeaway, in a deal worth about &£600,000. The deal, which was put together by sponsorship agency Connexus and Granada Enterprises, includes broadcast sponsorship of the shows on ITV1 from June 8 plus additional coverage on ITV2. Siemens mobile will also […]