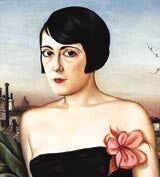 Spirit Advertising has been appointed to develop a brand campaign for Whitechapel Art Gallery as the East London landmark gears up for a &£12m expansion.

The gallery, which is regarded as the capital’s most important public modern art venue after Tate Modern, is to almost double its exhibition space. Spirit will be working on the supporting marketing campaign, set to break later this year.

Whitechapel was the first British public gallery to show artists such as Picasso, Pollock, Hockney, and Gilbert and George. It was given a &£3.2m Lottery grant last month, enabling it to expand into a former library next door. It will also offer public access to its 100-year-old archives for the first time.

Whitechapel’s current exhibition is being supported by Classic FM. The gallery has also worked with The Guardian, The Daily Telegraph and Time Out.

In November, Fallon won Tate Group’s &£1m creative and communications planning account, seeing off competition from Abbott Mead Vickers.BBDO in a final two-way pitch. TBWA held the Tate Britain account between 1997 and 2000. After that, the business was handled by Miles Calcraft Briginshaw Duffy.