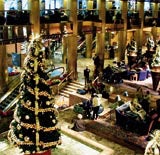 Christmas comes but once a year and every year it seems to arrive earlier. In North America, the tinsel and baubles made their first appearance in September and many retailers are already experiencing the benefits of the festive spirit, with an unexpectedly strong third quarter during which consumer spending increased 6.6 per cent. Online sales revenue is forecast to be worth $100bn (&£58.6bn) this year, and $12.2bn (&£7.1bn) of that is likely to be Christmas sales – so online marketers are fighting hard to get their message across as they bid for their piece of the Christmas cake

Amazon, which announced its first non-holiday season profit this quarter, is running a two-month campaign featuring what it calls its “Holiday A-List”. It has enlisted an impressive roster of celebrities including Bill Cosby, Bruce Springsteen, members of rock band REM and Michael J Fox. Each day for 60 days, a different celebrity appears on the Amazon homepage with a message and an offer of exclusive content, art, music or video clips.

As well as banking on celebrity endorsements to pull in the punters, Amazon has also expanded its product range in the hope of securing its first full year of net profit. By offering more Amazon-branded products and introducing alliances with other retailers, such as Target and Toys’R’Us, the site has become more of a virtual department store. The company is even experimenting with selling gourmet foods: everything “from feta cheese and prosciutto to jelly beans and macadamia nut oil,” the website says. It’s certainly a far cry from books and CDs.

What is happening at Amazon seems to be indicative of the new economics of e-tail – once you have a shopper on your site ready to buy, you should offer them as many reasons as possible to buy more and more often. Like the specialist high-street retailers and out-of-town supermarkets, the online shopping world is consolidating – and gaining buying power in the process.

This is certainly a belief that Barry Diller adheres to. Formerly the head of Twentieth Century Fox and one of the best-known business figures in the US entertainment industry over the past 20 years, Diller is now chief executive of InterActiveCorp (IAC). After a two-year acquisition trail, IAC is on its way to becoming the largest e-commerce business in the world, with revenues on course to hit $6.2bn (&£3.6bn) this year (outstripping Amazon.com and Ebay).

Grouping together online giants such as Expedia, Hotels.com and Ticketmaster, Diller has been building a business whose success comes down to old-school economic principles where size really does matter. Bigger internet companies can put the squeeze on suppliers in much the same way that Wal-Mart does offline, enabling them to achieve that “pile ’em high and sell ’em cheap” ethos. Diller also plans to let each business within the group sell each others’ services through their existing networks, boosting one another’s performance even further.

Like Amazon, Apple Computers has also embarked on a celebrity-led campaign. Apple’s recent launch of the Windows compatible iTunes, a music download platform originally for Mac, featured endorsements from veteran music stars such as U2 singer Bono and the Rolling Stones’ Mick Jagger. By featuring these “heritage artists”, Apple aims to appeal to an older and wealthier customer than it would normally do but just the kind of person who might be able to afford $400 (&£235) to buy a 40-gigabyte iPod for Christmas.

Apple’s iTunes for Mac launched in April and, piggybacking on the success of iPod, it is now blazing a trail as the first flat-rate music download service to have negotiated content deals with all of the major record companies. The service sold over 10 million songs during its first six months. Apple chief executive Steve Jobs plans to use the success of its online product to generate sales of hardware, and vice-versa, during the Christmas period.

Beyond celebrity endorsements, Apple has also agreed deals with other businesses in an attempt to raise the profile of iTunes. For instance, America Online has agreed to put iTunes “buy this song” buttons beside every song that is listed in AOL’s music service. This has the potential to convert AOL users (of which there are 25 million), into iTunes subscribers.

Furthermore, PepsiCo is about to launch a give-away of 100 million iTunes songs as part of its promotion for the 2004 Super Bowl. Pepsi will produce 300 million specially marked bottles, 100 million of which will have caps that entitle the customer to download one free song from Apple’s music store.

These new marketing partnerships are all aimed at moving iTunes out of the niche market of Mac users and into the mainstream – and hopefully prompt consumers to buy a piece of Apple hardware for Christmas.

When it comes to the festive season, e-tailers must also make sure that their marketing is backed by a high standard of customer service. A recent poll by Harris Interactive showed that e-tailers should expect a 60 per cent increase in customer contact during November and December. It also revealed that the majority of American consumers (68 per cent) believe that five minutes or less is an acceptable amount of time to respond to phone inquiries; and nearly half (48 per cent) said less than five hours is acceptable for responding to e-mail or website inquiries.

The online shopper is ready to spend this year but is demanding more than just a celebrity endorsement from online brands. This festive season could be a very jolly one for many e-tailers, but only if they get their product offering and marketing right.