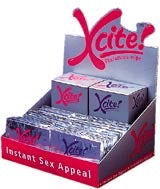 Exciting news for people who never seem to have any success attracting admirers – not, of course, that there are any such luckless creatures among the Diary’s readers.

London-based company Kiotech has developed Xcite!, a wipe-tissue soaked with pheromones, which comes with a health warning attached stating that they “must be used responsibly”.

Pheromones are the scent-free, naturally-occurring chemicals which attract us humans to each other. According to the packet: “Whilst the way people look and talk are obviously important, the human pheromone aroma can increase your sex appeal.”

Not only that, Diary readers won’t have to make do with those scented freshen-up towels from KFC any more.