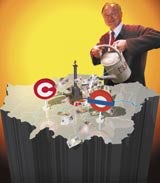 No stranger to controversy, London Mayor Ken Livingstone is now under fire for spending the kind of sums on advertising more commonly associated with top brands such as British Gas, Heinz, Lloyds TSB and Persil.

Livingstone, who is currently preparing his own campaign for the mayoral elections in June next year, spent &£18.5m on advertising campaigns for the Greater London Authority (GLA) and Transport for London (TfL) in the 12 months to August 2003, according to Nielsen Media Research. Advertising spend for the previous year was &£8.5m. The latest spending spree includes &£5m for advertising the controversial London congestion charge and more than &£6m on promoting the capital’s public transport services.

Yet, although the GLA and TfL are together on a par with many household brand names, they still fall way behind the largest public sector spender, COI Communications, which comes second to Procter &amp; Gamble for advertising investment. And with more funding earmarked by the Government for key public sectors such as the National Health Service, the amount set aside for advertising may increase still further. So is Livingstone’s expensive spending habit merely a sign of the times, reflecting increasing commitments to pubic service?

Into the red, Ken

The trouble with this theory is that it is not only the scale of spending on advertising that is causing concern, but also the fact that Livingstone has gone well over the combined budget for advertising and public relations for the GLA and TfL.

Political rivals point to a meeting of the Assembly Budget Committee at which accounts were presented showing that the Livingstone administration had spent &£49.6m on advertising and public relations for the year to July 2003, more than ten per cent above the &£39m budget.

A spokesman for the Liberal Democrat mayoral candidate Simon Hughes says: “The fact that Livingstone went over budget on advertising and public relations in the past year shows that he is gearing up for the next mayoral election.”

Although mayoral candidate Steve Norris’s spokesman does not take issue with how much Nielsen claims the GLA has spent on advertising the congestion charge, he adds: “The &£50m advertising and marketing spend has been splashed out without benefiting Londoners.”

It is a charge that the Mayor’s office denies; it also disputes the figures from Nielsen. “The amounts quoted are inaccurate,” says a spokesman for the Mayoral Office. “However, most of the expenditure on marketing in the first year has been for public information activity by TfL, explaining how to operate the congestion charge. And the tourist agency VisitLondon has conducted a number of highly effective campaigns promoting London’s leisure industries. The GLA has spent only &£105,000 on advertising this financial year [April 2003 to March 2004].”

Apart from informing drivers about the congestion charge, money has been spent on campaigns telling Londoners that there are “more police on the beat” and encouraging them to recycle waste. Also, last week a television campaign for VisitLondon, starring Neil and Christine Hamilton, launched, extolling the virtues of the capital’s free attractions. In addition, the mayor has put his might and his money behind London activities such as the Notting Hill Carnival and ethnic festivals such as Diwali, for which an event was held at Trafalgar Square last weekend.

Using taxpayer’s money to boost your own political fortunes is, of course, not allowed, but even Livingstone’s friends within the advertising industry concede that it is often difficult to draw a line between the “London Mayor” and “Ken Livingstone”, the man “who loves to trumpet his successes”.

One advertising executive says: “Ken is so much bigger than London itself, and hence the reason why the man is so effective. He knows all about the power of marketing and advertising, and I think he uses it effectively and ultimately to his own advantage.”

But Nick McElwee, the board account director of Euro RSCG Wnek Gosper Partners, a GLA roster agency, argues: “It is dangerous and inappropriate to make comparisons between the amount the mayor spends on advertising and how much, for example, Unilever spends on its Persil brand, because it is only about headline figures. Advertising campaigns that talk to Londoners are aimed at a large and varied group, and I think that more money needs to be spent when communicating with this type of market.”

Campaigner of the County Hall

Chris Powell, chairman of BMP DDB, the agency responsible for the Labour Party’s advertising between 1992 and 1997, has written a book How The Left Came to Love Advertising in which he argues it was Livingstone who taught Labour the art of advertising.

He says that Livingstone symbolises the London Assembly. “Here is this man, extremely refreshing and very enterprising; maybe not right all the time, but a politician who has been trying to reach the public.”

Dubbed in the past as “Red Ken” for his left-wing views, Livingstone rose to prominence in the Eighties when he led the Greater London Council (GLC), the city’s last metropolitan government. BMP helped Livingstone create a campaign to fight Margaret Thatcher’s plan to close the GLC, but the battle was unsuccessful – the GLC was abolished in 1986. The directly elected position of London Mayor was created three years ago to run the GLA.

The mayoral office was further strengthened in July this year, when control of the London Underground was transferred from government to TfL, a body under the responsibility of the Mayoral Office.

With several years of under-investment in London Underground to make up for, TfL has been criticised for frittering money on a “Love London” advertising campaign, designed to encourage use of the Underground, instead of investing in the Tube’s infrastructure.

TfL group marketing director Chris Townsend appears to distance himself from the campaign, created by M&C Saatchi, by claiming that it was developed before his arrival. But Townsend defends the &£18m marketing spend, saying the bulk of it – &£13.6m – went on TfL: “Of this &£13.6m, &£8m was spent on the congestion charge campaign. This spend will drop significantly, because both the campaign and the initiative have proved to be very successful. What the critics are not seeing is the bigger picture. For instance, we spent &£1.2m on promoting London buses and, as a result, bus use is at its highest since World War II, having increased by 20 per cent in the past three years.”

Townsend is tight-lipped about his future plans, but it is expected that Londoners will be bombarded with another advertising blitz next month. The mayor is set to launch a “massive” campaign promoting the new Oyster travelcard, which is to be introduced later this year.

Besides the Oyster card, there are two other projects keeping the mayor busy: the 2012 Olympic Games bid and plans to reorganise the 32 London boroughs and the Corporation of London into five “super districts”. It was Livingstone who was instrumental in London’s official bid for the 2012 Olympic Games, which began in May this year, by helping to negotiate the funding arrangements of the bid. But the proposal to scrap London boroughs in favour of five super authorities is causing controversy, as some see it as a way for Livingstone to concentrate more mayoral power into his hands. BMP’s Powell says: “Maybe Livingstone is using advertising for self-aggrandisement, but he has been more than successful in leading London and raising awareness about the issues surrounding the city.”

It’s not only City Hall that has resorted to spending vast amounts of taxpayers’ money to get across messages. COI Communications, which spent &£162.6m for the 12 months to March 2002, down 1.5 per cent on the previous year but up from &£43.8m when Labour was elected for the first time in 18 years in 1997, is always on the hunt for ad agencies to create campaigns for the latest vote-catching and headline-grabbing government initiative. The Government’s latest attempt to do the “right thing” is an advertising campaign encouraging people to adopt a fit and a healthy lifestyle.

But Powell says: “On average the Government spends far too little on advertising compared with the commercial sector. It actually needs to spend more on talking about its policies.”

Whitehall does not just rely on advertising when it comes to marketing techniques. The Department for Work and Pensions recently commissioned a Policy Studies Institute think tank to look at profiling benefit claimants as part of a communications initiative to get people off welfare. A spokesman for the department denies the move is in any way related to marketing, but adds: “It is a way to help promote schemes that could get people off incapacity benefits.”

One advertising industry expert says: “The problem government faces is that it has to be seen to draw a distinction between information and marketing, because the latter is seen as being a commercial practice and hence a no-go area. It would perhaps get away with producing campaigns and marketing messages if it could measure the effectiveness in each case. But the fact is that it is easier to measure the return on investment of a 30-second Persil ad than a campaign that talks about safer streets of London.”

Co-chairman of Euro RSCG Wnek Gosper Partners Chris Pinnington says Whitehall takes its responsibility for spending taxpayers’ money on advertising very seriously. He says it spends a lot of time deciding on the right approach of campaigns, particularly as government advertising tends to deals with changing attitudes and behaviour, messages for which it is hard to determine effectiveness. But, unlike the COI, which has to answer to the Advisory Committee on Advertising made up of representatives from the marketing industry, the Mayoral Office can only come under scrutiny from GLA members and members of the public who raise issues during GLA question-time sessions.

No stranger to either fame or brickbats, Livingstone is obviously at home in the spotlight. Expelled from the Labour Party after choosing to run for London Mayor as an independent when Frank Dobson was chosen as Labour’s official candidate, he is understood to be close to being re-admitted to the party fold. But issues such as the future of Nicky Gavron, whom Labour has already adopted as its mayoral candidate for next year’s election, remain unresolved.

What is clear is that Livingstone will continue to loom large over London, in an age when politics are dominated by media and driven by marketing. And, if he is re-elected as London Mayor and manages to hold on to London’s public purse for another three years, perhaps his critics will fall silent.