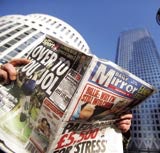 The National Readership Survey (NRS) has been held up as the gold standard for information on newspaper and magazine readership habits for almost 50 years.

But its lustre has dimmed and it is going to have to act rapidly if its research is to remain relevant to print media in the 21st century.

The NRS is coming under fire for putting more emphasis on servicing the requirements of magazine publishers rather than newspapers. It acknowledges that one of its main priorities is to look at “decoupling” the lengthy NRS interview process to elicit more useful information for both forms of publication (MW last week). The data would be married later for media industry consumption.

Other issues the NRS must tackle include the large fluctuations that show up in readership data, which undermine its credibility. Buyers say that the disparity between NRS readership data and Audit Bureau of Circulations (ABC) figures causes serious headaches during negotiations.

There is also the need to ensure information keeps pace with the changing needs of agencies and their planners. Several media insiders feel that the data the NRS supplies should be more qualitative. As one former board member says: “The NRS is not serving the needs of its customers or stakeholders.”

The stakeholders in the NRS are the Newspaper Publishers Association (NPA) and the Periodical Publishers Association (PPA), which hold 44 per cent each, and the Institute of Practioners in Advertising, which holds 12 per cent. Between them they plough almost £4m a year into the research body, but some observers say that there is constant tension between the differing requirements of the newspaper and magazine owners. One former NRS board member remembers discussions as a “bun-fight”. However, current board members say that there is a new spirit of co-operation and a will to overhaul the body. The NRS addressed its growing image problem by appointing Zenith Optimedia chairman Simon Marquis as its public face at the end of last year. The NRS also appointed a PR agency, and earlier this year used specialist researcher Ocean Consulting to talk to 40 senior industry figures to contribute to a

strategic review of how it operates.

Marquis says that before Easter, the NRS board gave him the mandate to investigate a possible decoupling, and also to look at the relationship between ABC data and NRS readership estimates, “to see if we can smooth the peaks and troughs”.

The question of fluctuating data has been a longstanding problem. Media buyers regularly see ABC figures showing a drop in readership, but NRS data showing a rise. This has contributed to a drift towards relying on ABC figures, which has been compounded by the change in trading methods at newspapers. One media buyer says: “Now that newspaper ad sales trading has become more commoditised, I don’t think we use the NRS as much. As a trading tool I don’t think it has as much credibility as it once did.”

He says that for the NRS to be more useful for planners, it should offer more data about newspaper sectional reading and more information about lifestyle and attitudes, rather than economic and social profiling. “Planning has become a lot more sophisticated and I don’t think clients and agencies look only at social and economic data.”

While the NRS is looking at the bigger picture regarding qualitative research and more credible data, some basic logistical problems are also being addressed. The harried readers of modern society have less time to spend being quizzed on their reading habits and are less welcoming of strangers in their homes. The NRS is finding it tougher to seek out 3,000 fresh faces each month to be questioned, particularly in London.

Recent initiatives include the Personalised Media List (PML), which narrows down the huge number of magazines the NRS asks interviewees to identify. One buyer says there is a danger of people “zoning out” while being shown dozens of magazine mastheads, and the PML approach asks some lifestyle questions first to help to make the mastheads displayed more relevant.

Also being tested in London is a 16-page self-completion questionnaire. The NRS is wary of substituting face-to-face interviews with this method, but does offer a small incentive – a £5 grocery voucher – to encourage people to complete the questionnaire.

There does seem to be a strong consensus that the NRS should be maintained, and that the NPA and PPA should not go their separate ways. Evening Standard advertising director Alan Brydon says: “A good NRS is better than a good anything else. If it can get its act together and deliver what people want, they would rather have the security blanket of the NRS brand.”

However, there are dissenters who question even the value of joint industry research. One media buyer says: “It doesn’t matter where the information comes from, as long as it is backed by a credible research company. People don’t mind if it doesn’t carry the NRS brand.”

Manning Gottlieb managing director Neil Hurman, who is a former ad director at Mirror Group Newspapers, says: “I would question whether joint industry research will be at the heart of media surveys in ten years’ time in the way it is today.”

However, a senior newspaper executive counters that if a third party research company owned, for instance, by a global agency network delivered the data, it would not have credibility. He adds: “No-one is going to pick up the tab for this except newspaper and magazine owners, and I think if it was offered commercially you would not get many takers. You can’t have it being run by a company which might drop it after two or three years.”

Marquis says that one option under consideration is the development of an NRS “kite-mark” to endorse the integrity of data developed by individual publishers such as EMAP or News International.

The NRS does not have a reputation for acting swiftly, and Marquis will be reporting back findings of “work in progress” at this month’s board meeting. It faces the challenge of meeting expectations speedily while ensuring that any new methodology and ensuing data is watertight before it is delivered. Otherwise criticism could boil over into outright dismissal of its worth.

I was interested to read the recent article “Consumers and e-tail begin to click” (MW 14 April). Royal Mail’s research showed that 29.4 million people used the internet to buy gifts last Christmas, great news for e-tailers. However, there are still lessons to be learned and meeting the high expectations of online consumers is difficult […]

Three out of the four most complained-about ads last year used religious imagery to sell their product. Is this due to a sensitive public after 9/11 or the ignorance of marketers? By Sonoo Singh

Danish furniture retailer Ilva has appointed Isobel to its advertising account, with a brief to create a launch campaign for the opening of its first three UK megastores. Isobel, which won the account without a pitch, is believed to have courted the retailer for over a year. It is understood the chain’s management talked to […]