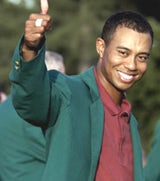 Nike, Electronic Arts and Gillette have all released statements following the news that the world’s number one golfer will return to competition at the US Masters in April.

The golfer has been taking a break from the sport since details of his numerous extra-marital “transgressions” emerged at the end of last year.

Some of his backers – Gatorade, AT&T and Accenture – dropped Woods amid global coverage of his affairs, while Gillette said in December that it was “limiting” his role in campaigns.

Nike says it “looks forward” to Woods’ return, while Gillette says it is “looking forward to seeing Tiger back on the course.”

EA demonstrated its support for the golfer earlier this month when it announced the release of a Woods-themed game.

Broadcasters will also be hoping for a bump in ratings following Woods’ return. According to Nielson, US television ratings for last year’s Masters, which Woods did not play in, were down by almost a half.