The motives for this relationship can vary. In many cases, such as the highly successful sports sponsorship strategy of Hyundai, the major goal of it becoming an official FIFA partner is simply increasing brand awareness. In other, more complex cases the sponsorship goal is related to brand associations. Red Bull’s current successful association with Formula 1 racing, for example, will certainly do no harm to its awareness levels, but the real objective of the strategy is to drive the key brand associations of speed and performance which are at the heart of the brand’s success with consumers.

What intrigues me about brand sponsorship, however, is a third driver that may also explain why a brand targets one particular relationship over other alternatives. It’s less strategic than the need to build brand awareness or associations and perhaps it’s a more implicit factor. I believe many brands seek sponsorship vehicles that exhibit similar weaknesses to their own. Clearly, this does not make any strategic sense because sponsoring something with similar corporate deficiencies to your own only exasperates and emphasises the problem. And yet I think many brands cannot help themselves.

Take the announcement last week from Barclays that it had extended its sponsorship of the Premier League for another three seasons. What Barclays and the Premier League have in common is a series of shared weaknesses. Both are too big. Both spend money excessively to promote themselves. Both appear overtly greedy and run on almost exclusively financial principles that alienate them from their core customers. And despite their size and financial focus, both are deemed by some to be financially unstable with many of their constituent parts teetering on the edge of financial meltdown.

Like two ex-heroin addicts who strike up a flirtatious conversation at a dinner party, there is a dangerous attraction between these two that perhaps cannot be denied but should certainly not have been continued.

Rolex and Roger Federer are both Swiss… But now look again. Rolex is boring. And so is Federer

In social science there is a mountain of evidence to confirm what academics call “the similarity principle”, which suggests that weakness very frequently leads to an attraction to others that exhibit the same traits despite the fact that the resulting relationship is likely to be an unhappy one. For example, alcoholics fall for other alcoholics despite both parties initially hiding the weakness.

Branding has always had very strong anthropomorphic roots. We speak of concepts like brand loyalty today without realising that the concept originated with interpersonal relationships. Our brand vocabulary is filled with concepts like “lovemarks”, “product lifecycles”, and “brand personalities” that all originated as human concepts, not commercial ones. And I think in the case of sponsorship we can add another anthropomorphic trait – the similarity principle. I think brands often sponsor things because of an unhealthy and unrecognised attraction to similar failings.

Take the long-running relationship between Roger Federer and Rolex. Ever since Federer’s triumph at Wimbledon on 8 July, the Swiss brand has been proclaiming his genius and its relationship with him in a mass of full-page ads. There are certainly some positive reasons why these two would work together – they are both Swiss, elite, successful and precise.

But now look again. Rolex is boring. And so is Roger Federer. A recent exposé in The Times by Liam Nolan, the man who used to set his strings at Wimbledon, revealed that the champion would often sit for 30 minutes next to him in complete silence while his racquet was being set. Federer is also widely seen, despite his current world number one ranking, as a player now set for decline.

All the data I have seen on Rolex confirms its position as the world’s biggest watch brand but also that its momentum and tracking scores are starting to drop off. Federer and Rolex are both heading for the senior’s circuit.

The similarity principle was also at work this week on the other side of the Atlantic. Ralph Lauren is the official clothing sponsor of the US Olympic team. Unfortunately, while all the athletes’ outfits may have USA in big letters on the outside, they all carry a Made in China label on the inside. What better sponsor could there be for 2012’s America nation than a fashion brand that outwardly parades its US values but does most of its actual manufacturing in China?

And best of all there is BP and its sponsorship of the London Olympics. The similarity principle could not have a better current exemplar than these two. Both based in the UK. Both run by authoritarian and out-of-touch leaders. Both too big to be run optimally. And both susceptible to major disasters as a result. What better sponsor for the fortnight ahead? 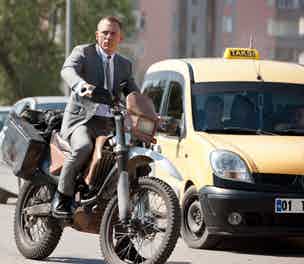 Honda is to launch a marketing campaign to exploit its first partnership with the James Bond for the upcoming film Skyfall, starring Daniel Craig.