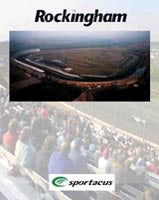 The agency, which is run by former Football Association commercial director Stephen Pearson, has been contacting blue-chip brands and aims to secure a deal by the end of the year.

Since its launch last September, the Northampton venue – which cost &£52m to build and seats 52,000 spectators – has appointed a number of agencies to raise its profile.

Michaelides &amp; Bednash was appointed to handle launch advertising. The venue brokered a cross-media deal with EMAP, and ads ran in the September issues of Elle and FHM as well as on Manchester’s Key 103 and Leeds’ Aire FM. Television ads aired on Eurosport. In May, Rockingham appointed Palmer Hargreaves Mint and MediaCom to handle a second wave of advertising, planned for later this year. The venue has began talks with direct marketing agencies about promoting events.

When Richard Wheatly first joined Jazz FM as chief executive, the business was worth less than £6m, but under his leadership it went from strength to strength and last week was sold for £44.5m. Lucy Barrett speaks to the man who helped to move

Insurance company Royal & SunAlliance (RSA) is recruiting a strategy leader for its commercial division. The appointee will replace Andy Farrow, who has taken up a new position within the company.

Warner Music UK has appointed Jane Davies to the newly created role of head of film, television and advertising, with a brief to establish relationships with major brands and advertising agencies. Davies was previously creative manager at Warner/Chappell Music and has held a similar role at Universal Music. Warner Music intends to promote licensing opportunities […]