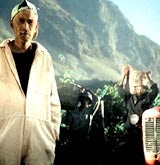 The Sports Café, the sports oriented restaurant chain, is to launch its first venture in the retail food sector, after clinching a deal with Waitrose supermarkets.

Sports Café ribs and wings will be on sale exclusively through the chain from June 11 and, if successful, other food products from the Café’s menu could be developed into a takeaway style range.

This is only the second time Waitrose has taken a food range from a restaurant chain – the first being Pizza Express salad dressing.

Sports Café was one of the first themed chains aimed at sports fanatics in the UK.

Operations director David Evans says the chain has Manchester, Leeds and Glasgow earmarked for expansion to add to the three cafés already open in the UK. It is also looking to move into mainland Europe through cafés in Barcelona and Greece.

The Canadian company already has two cafés in its native country, three in South Africa and one in Beirut.

Evans says the café has high-profile sports stars from the World Super Bike championships (which the chain sponsors), Ryder Cup golfers and a number of England football players ready to put their names to its products.

The launch of the products will be supported by in-store promotion. Design agency P&M Design worked on the packaging.