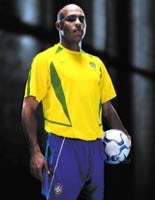 It may seem a long time ago, but think back if you will to the 1998 World Cup, when there was confusion about whether the Brazilian star Ronaldo would be playing in the final against France. Due to ill health, his name was not included on the team list on the morning of the game. Unaccountably, however, later that day he was sent on to play – looking very much the worse for wear.

The story goes that the Brazilian team’s principal sponsor, Nike, insisted that Ronaldo be included in the final line-up, ill health or no ill health. Such is the magic that surrounds the player’s name, then and now, that the sponsor knew Ronaldo was pivotal to the image of the team – an image that Nike was spending millions of pounds exploiting.

Apart from Nike and the Brazilian team, no one really knows how much truth there is to that story, which has been doing the rounds since that day in Paris. But the point is that, such is the power of the big sport sponsors, the story is very believable.

Sponsorship is a growing sector, despite problems in the past six months with the collapse of Sportsworld and ISL. In 1991, sponsorship in the UK was worth &£238m; last year, it was worth &£420m.

But alongside this growth is an increasing ruthlessness about how to make that money work for sponsors. Except in rare cases – and there are still some – sports sponsorship is no longer about which sporting fixture the sponsor’s chairman would most like to get tickets for. Events and rights holders have to work harder to convince sponsors that their money is being well spent and that there are plenty of opportunities to leverage their brand.

Only a handful of companies are seriously big spenders on sports sponsorship. According to Richard Berry, sales director at sponsorship research and evaluation company S:Comm, six Premiership sides were eagerly courting sponsors at the end of the 2001/02 football season.

This summer’s Commonwealth Games in Manchester present an ideal opportunity for many clients to test their sponsorship skills during the biggest sporting event to take place in the UK this year. The games has signed up ten official sponsors, each of which has paid &£2m for the privilege. But on closer inspection, some of the sponsors appear to have contributed even more to the event through payments in kind.

Microsoft, for instance, which was one of the first sponsors to get involved, estimates that it has actually spent about &£5m on the event, including &£800,000-worth of software as well as more than 600 working days from 30 consultants who are planning and building the technology platforms for the games.

Considering the money and effort being provided by Microsoft, the software company is taking something of a risk, as it has little, if any, experience of sponsorship on this scale.

Microsoft sponsorship business manager Sarah Fasey admits that the sporting element of the event is not why Microsoft got involved: “It was really about the scale of the event and the opportunity to show what we could do from a technological point of view. The Commonwealth Games will be the first international, multi-sport, multi-venue event to run on a single, integrated, Windows platform.”

Because of the nature of Microsoft’s business, the company is often approached by events to get involved through sponsorship, mainly by providing technical input. Fasey says: “It is difficult to know when to say yes or no. Sponsorship isn’t a regular part of our marketing strategy, because it has so much to do with brand awareness and, obviously, we don’t need to increase brand or logo awareness.

“But with the Commonwealth Games, we have the opportunity for people to understand better what we do and what we are capable of doing.”

The chance to display its skills

The games provide Microsoft with a unique opportunity to display its wares. In the commercial sector, for obvious reasons, Microsoft is restricted in the degree to which it can talk about the security systems it has in place for major clients. Once the games are over, however, Fasey says that Microsoft will be able to talk in detail about the security systems used for the event “which will showcase our credibility in that environment”.

The benefits of the games for some other sponsors are less obvious. Manchester Airport, for instance, is one of the official sponsors and it is easy to see why there is speculation that its involvement has more to do with local government pressure than with any perceived commercial benefits.

National law firm Addleshaw Booth, another games sponsor providing “benefit in kind” sponsorship (where the sponsor provides services in exchange for tickets and hospitality benefits) can get out of hand. The firm began its association with the games as an official partner, providing legal services and advice to the event organisers in exchange for a package of ticketing, hospitality and branding rights. However, it soon became clear that the value of the services provided by Addleshaw Booth was far outstripping what it was getting in return and so its status as official partner was upgraded to official sponsorship.

Berry says sponsorship partnerships that happen “for no obvious or sensible reason” are becoming more rare. He says: “Companies can’t afford to waste that kind of money now.”

23red managing partner Adam Wylie adds: “If you strike a ‘benefit in kind’ partnership, it must be a genuine two-way deal. It is very important that the rights-holder understands that, unless it can supply solutions for its sponsors, the whole market will suffer. If sponsors feel they didn’t get what they wanted out of the deal, it will depress the price of that event as well as future events.”

Gone are the days, according to Wylie, when events and rights holders took money from sponsors leaving it up to them to try to leverage. He says: “Sponsorship budgets will decrease unless brand owners get their money’s worth. It is up to rights holders to make sure that they do.”

Wylie says that brand marketers are beginning to take sponsorship more seriously and as a result new agencies are springing up to exploit this market: “The problem is that most rights holders have little marketing expertise and are voraciously trying to hit their income targets. They don’t necessarily have the time or experience to really think about the deals they are making.”

Although sponsorship has become more popular – and attractive – in recent years, there remains an element of unpredictability about the business that makes it much more tricky than developing a six-month TV campaign.

Berry cites this summer’s World Cup in the Far East as an example: “When Italy was knocked out by South Korea, the Italian state broadcaster RAI, which bought the TV rights to the games, looked seriously at suing FIFA for bad refereeing, because of the loss of revenue it suffered after the team was kicked out.”

At the other extreme, Costcutter is still laughing after having paid a mere &£900 to put its name on the sleeve of little-known Swiss tennis player Michel Kratochvil. No one predicted that he would end up playing Tim Henman in front of a TV audience of 13.5 million.

Microsoft must be hoping that, with its first major foray into multi-sports event sponsorship, the unpredictable is not part of the line-up at the Commonwealth Games.

BUPA is a long-term sponsor of what it calls ‘non-elite sport’. For the past ten years it has sponsored the BUPA Great North Run, the UK’s largest mass-participation sports event and the world’s biggest half-marathon, in which 40,000 people take part.

Its involvement as the official health partner for the Commonwealth Games is a major step up for BUPA into the international sports’ arena.

Group marketing director Simon Sheard says one of the main reasons for sponsoring the games is that BUPA is one of the biggest employers in the Manchester area. It has 1,200 staff in Salford as well as a large hospital in Manchester.

Apart from the &£2m sponsorship fee, BUPA will be providing medical insurance cover for the visiting athletes.

As part of the sponsorship package, BUPA’s free ‘Mind, Body and Soul’ event will take place in the city over two days. The event will comprise a number of activities and services held in separate marquees, including a mini-triathlon and a computer zone with Xbox consoles for children. There will also be Indian head massages and a reflexology zone for those in need of some pampering.

BUPA’s ‘Wellbeing Squads’ will be on hand to dish out free sun-cream or raincoats, dependent on the weather.

Sheard says: ‘My view on sponsorship is that the brand must get involved with events that make sense to consumers.

‘BUPA is about health and taking care of yourself. We want to promote an active lifestyle to as many people as possible, which is why we felt the Commonwealth Games was an ideal sponsorship partner.

‘But paying the &£2m sponsorship fee is just the start of the process. To make the sponsorship work, you have to integrate it into all your communications.’