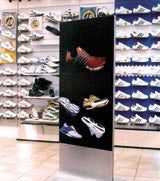 There has been a significant change in the sports market over recent years driven by a number of key factors, including the high-profile media coverage of sport, the huge marketing budgets of the global brands and the increasing fashion appeal of sports clothing.

But the growing interest from teenagers in sports brands as fashion wear means that the category is seeing continued growth, and this is contributing to a decline in the equipment market. It also reflects the fact that traditional games, such as racket sports, have lost out to new forms of exercise, such as aerobics, gym-based exercise, yoga, pilates and kick boxing, all of which require few, if any, equipment purchases. Sports retailers in some countries, such as France and Italy, still benefit from the ski season, as few British consumers buy their own ski apparel and prefer to rent equipment from resorts.

The latest data from Mintel shows that the UK sports goods market was worth an estimated &£4.5m in 2003, an increase of 3.6 per cent on the previous year. The report shows that 75.4 per cent of spending on sports goods was through the sports specialists channel, which illustrates the stranglehold that the likes of JJB Sports, the John David Group and Blacks Leisure have. The department and variety store channel was in second place, accounting for 6.9 per cent of spending.

This is largely reflecting the strong sports offer available at the John Lewis Partnership. Sales through clothing specialists, at 5.8 per cent, includes the contribution from UK stalwart Marks &amp; Spencer and its View From range, which is technically focused yet relatively affordable.

Sports retailers are important parts in the fashion and leisure wear market as a whole, not just in terms of clothing and footwear for sports use. Adolescents’ desire to buy into the emotional aspirations of sport continues to be one of the driving forces behind the UK sports market. As a result, most of the leading players have tapped into this particular consumer segment.

The European retail sports market is dominated by powerful international brands, many of which have their origins in the US. The big sports names often have a portfolio of smaller, niche brands as well, giving them greater coverage. For instance, Reebok owns the Rockport outdoor footwear and Greg Norman golf clothing ranges. Rockport also has the licence for the designer footwear brand Ralph Lauren.

These main brands have all moved into retail in recent years, reinforcing their presence with a network of hi-tech concept stores. Nike has developed the Nike Town model, of which there are 18 worldwide, including European outlets in London and Berlin. These stores offer interactive areas and a range of specialist services, as well as a range of branded goods.

Nike is also developing a network of franchised stores in Europe and has stores in France, Germany and the UK. However, in early 2004, it announced the closure of its two French stores after a year’s trading, following a dispute with its French franchisee. German brand Puma opened its first standalone store in California in 1999, and now has stores in big European cities, including Milan, Rome, London and Paris.

Fila, the Italian brand, operates the Fila Sport Life Store network, the first of which opened in Milan in 2001, followed by stores in Paris and Tokyo.

To a large degree the UK sector’s strong performance in the past five years reflects this nation’s love affair with spectator sports, sporting celebrities and US fashion trends. It is clear that a relatively limited amount of sports apparel is bought for participation reasons, which highlights the vulnerability of UK sports retailers to the vagaries of fashion and the possibly transient obsession with celebrities.

The strength of demand for sports gear and equipment is one of the positive aspects about trading in this sector. To some degree, it insulates sales from changes in pricing, consumer income and other economic influences. For instance, golf clubs, mountaineering equipment and running shoes all tend to be bought either because they need replacing or upgrading or because the purchaser has just taken up the sport – not simply because they have fallen in price or for other monetary reasons.

However, many of the British sports chains target sports spectators and followers of fashion rather than bona fide athletes, yet if the appetite for sports brands and styles softens, this could leave many companies exposed.

Moreover, as multiple chains have expanded it has forced independents out of business, which has reduced the choice of shops for genuine sports people seeking expert customer advice and service relating to high-specification buys. They have turned to niche outlets, one-off shops or distributors connected to public sports centres and clubs. Mintel believes that if sports brands do fall out of favour, the high street chains will find it hard to win back this important custom.

The Guardian is publishing a 92-page full-colour guide to the Euro 2004 football tournament next week (June 7) while the Observer Sport Monthly is to sponsor Channel 4’s England’s Dream Team programme on Saturday (June 5).

At the risk of appearing to suffer from paranoia, I feel I must write to comment on the new depths to which TalkSport’s advertising in the marketing press has plunged in terms of both taste and business sense. Once more it attacks Classic FM. This time it reaches new levels of depravity by using a […]

The Consumers’ Association has appointed Peter Vicary-Smith as its chief executive to replace Sheila McKechnie, who died earlier this year. Vicary-Smith is board director for fundraising and marketing at Cancer Research UK.