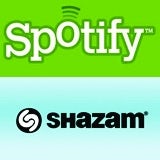 After identifying a song on Shazam or finding it in its charts or recommendations, users will be taken automatically to their Spotify app, allowing them to stream the tracks in full.

The functionality will initially be available to Shazam’s premium users in Europe on the iPhone and Android. Shazam free users will be able to use it later in the first quarter.

Last year Spotify made overall losses of £16.4m in 2009, despite increasing its total revenues significantly compared with 2008. According to Spotify’s figures, over 60% of its revenues now comes from subscription, the rest from ad revenue.