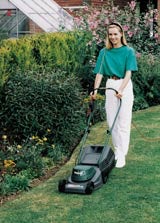 In the past 12 months, 64 per cent of the adult population spent some money on gardening, four per cent more than the comparable DIY home interest market. NOP’s exclusive research into the two markets, however, shows that more than twice as many gardening consumers as DIYers spent less than &£50, and DIY has more than four times the number of people spending over &£500 in the past year. However, the research also implies that gardening products are bought much more regularly than home improvement products.

Gardening is one of the few markets examined by Spotlight where older people make a significant contribution to sales. As in DIY, people under 25 have a low rate of involvement. But whereas 53 per cent had spent some money on DIY, only 30 per cent had bought gardening products. Even among the 25- to 34-year-olds, 17 per cent more had bought DIY products. But the over-55s more than take up the slack. Although the proportion of older purchasers (73 per cent) is five per cent less than that of 35- to 54-year-old purchasers, numerically they are easily the largest segment of the market, making up 37 per cent of purchasers. More importantly, they make up half of the all-important group which spends more than &£200 a year.

NOP’s research also reveals a high level of involvement with gardening-related activities. A quarter have read a book about gardening in the past year, 14 per cent have bought a gardening magazine, and another 14 per cent listened to a gardening programme on the radio. But not surprisingly, the most popular activity is watching someone else do the digging: 67 per cent of adults have watched a TV gardening show (although a quarter of these are armchair gardeners who have not bought any gardening products). All the other pastimes are more popular with purchasers; but the link between involvement and purchase is particularly strong for specialist magazines and shows: heavy spenders make up 38 per cent of magazine buyers, and 46 per cent of show-goers.

Purchase rates are generally higher in the gardening market than in DIY. Three types of products – seeds and plants, compost and growbags, and garden chemicals – were bought by at least two-thirds of purchasers, rising to eight out of ten for seeds and plants. These three categories are closely related. Generally they are not specific, one-off purchases, but annual “maintenance” products, representing a regular income stream for suppliers and retailers.

Gardeners patronise an extraordinarily wide range of outlets, including significant numbers buying from unconventional retailers. Garden centres have the largest franchise, with 73 per cent of purchasers, although the DIY superstores are only six per cent behind. The third most popular retailer, however, comes from outside the retail establishment. Just over four out of ten purchasers have bought from a market stall or private individual, who raises bedding plants or vegetable strips and sells them locally. A third bought from a supermarket, the same number as from the other end of the spectrum: the specialist nursery. Twenty-two per cent have used a department store, and 17 per cent mail order – another unusually high penetration reflecting the impact of specialist manufacturers and growers who sell direct. Only six per cent bought something while visiting a show – but this represents nearly half the attendees.

However, when NOP asked customers where they had spent most money this year, it became apparent that the market is clearly divided between the two major players, garden centres take 40 per cent and the DIY superstores 31 per cent. None of the other retailers claimed more than a tenth of major purchasers, the best performance being from market stalls and individuals.

This pattern held for the heavy spenders, with the DIY stores attracting slightly more of those spending over &£500, presumably because these are the major outlets for expensive garden machinery.

Far more gardeners choose a product – and particularly a plant – at the point of sale than as a result of media exposure: six out of ten bought something which had caught their eye. Seeing something on a television programme was the next most powerful stimulus, influencing 37 per cent, 15 per cent more than television advertising. Print media seem to be more effective – and far more widespread. Three out of ten purchasers bought something advertised in a magazine or newspaper, a quarter as a result of a gardening book and 15 per cent from editorial in a specialist magazine. Fifteen per cent bought something that they saw at a gardening show – more than twice the number who actually purchased at the show. Twelve per cent took the recommendation of a sales person; but radio has a much more limited influence, affecting only five per cent of buyers.

Heavy buyers – who contribute 70 per cent of total expenditure – maintain the average level of response to television programmes and advertising. Print media are far more important to the serious gardener; more than a third were influenced by gardening books, a quarter by editorial in specialist magazines, and 35 per cent by an advertisement in a newspaper or magazine.

But the most noticeable difference between heavy and light spenders is the influence of gardening shows. A quarter of those spending more than &£200 this year had bought something seen at a show, compared with 13 per cent of lesser spenders. The evidence of specialist interest linked to major expenditure, marks gardening out as a sector with a hard core of committed consumers, motivated by interest and enthusiasm – a stark contrast to the economy-driven DIY market.

67 per cent of adults watched a gardening programme

64 per cent bought gardening products in the past 12 months

Garden centres are the dominant retailer