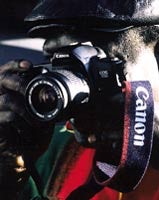 Exclusive research from NOP, conducted with a thousand adults, shows that nine out of ten currently use a camera. Although traditional still photography is still the most widespread form, with seven out of ten people using a 35mm camera, more recent innovations have made a considerable impact. Thirty-one per cent of the adult population take moving pictures with a video or camcorder; nearly a quarter use an advanced photo-system camera, and 23 per cent disposable cameras (which use APS film).

Digital cameras are also gaining a significant foothold in the market. Sixteen per cent of adults already use a digital camera, and another ten percent are seriously considering buying a digital camera in the next 12 months – which would bring digital camera usage up to the same level as APS.

Camera users do not stick to just one system of photography. Perhaps the least surprising duplication is between the still and the moving image: three-quarters of camcorder users also take 35mm photographs, and a third use an APS camera.

Six out of ten APS users also have and use a 35mm camera, although only a fifth of 35mm owners have made the leap to APS, suggesting that people may be continuing to use the older system as a supplement, or for different tasks. Even digital camera owners are unlikely to have abandoned film-based systems; 36 per cent also use an APS camera, and seven out of ten 35mm. Most interesting of all combinations, though, is the disposable/permanent axis. A quarter of disposable camera users also use an APS camera, and two-thirds use 35mm, indicating that disposable cameras may often be an impulse or distress purchase by people who do not have their usual camera with them.

The majority (87 per cent) of camera owners reckoned to use at least one still film during June, July and August 2000. Nearly half (45 per cent) of active photographers thought they would use one or two films this summer, three out of ten would use three or four, and a quarter, five or more; this group of frequent buyers is responsible for at least half of all films sold this summer. Photography, however, differs from many markets in that the key group of frequent buyers does not come from any particular demographic group, and has very similar attitudes to the mainstream customer market.

The summer is the high point of the year for camera usage. Most amateur photographers confirmed that they took “most of their photographs on holiday”; this seasonal focus is one of the main differences between regular and other photographers.

Consumers’ attitudes to photography show a high degree of psychological and emotional influence, putting the market firmly into the category of pleasurable, leisure-related expenditure.

Three-quarters of people who intended to take photographs during summer 2000 agreed strongly with the suggestion that “photographs are the best way of remembering times you enjoyed”, and only 5 per cent disagreed. Half of all camera users “usually”, and another quarter “sometimes” put their photographs in an album; and although less frequent than album preservation, seven out of ten “sometimes have enlargements, copies or special products made from their photographs”.

Because photography is so closely bound up with long-term, emotional valuations – and because most users buy only a few rolls of film – price in itself is not a major factor in the market.

Two-thirds of consumers rejected the idea of buying “the cheapest film available”, and only 16 per cent admitted that this was a major factor in what film they choose to buy.

Promotions which offer “more for the same money” are far more attractive than a low-priced product. Half of all users declared that they found “money off the usual price” and “getting a free film when the last one is processed” very attractive; although “money-off” scored 86 per cent overall, a mere two per cent more. “Three films for the price of two” was almost as powerful a promotion, attracting 44 per cent strongly, and another 42 per cent to some extent; this was the most attractive of the three options for people who used five or more films. By comparison, only a third of users were interested in “free or reduced price transfer to disk for home editing”.

High-street chemists dominate the retail market in both sale and development of still photographic films. Six out of ten users “usually” bought their film from a chemist, compared with 38 per cent buying from a supermarket, and a third from a specialist camera or photographic supplier. A fifth used a mail order developer or supplier; 13 per cent made a last-minute holiday purchase from the airport or ferry terminal, and the same number bought from a newsagent or tobacconist. Nearly half of all purchasers generally buy their film from more than one type of outlet; 23 per cent use three or more.

High-street chemists perform particularly well in the South of England, where they are the main source of purchase for two-thirds of photographers. Specialist retailers attract a third of customers in the Midlands and 37 per cent in the North, compared with a quarter in southern England. Mail order has a less polarised regional profile, but is strongest in the South and Midlands.

High-street chemists have an even more pronounced lead over their competitors when it comes to processing. Just over four out of ten photographers have “most” of their films developed by a chemist, compared with a quarter who use a high-street specialist store. A fifth used a mail order developer, the same number as bought “most” of their films from this source; the mail order companies often feature a replacement film system, an elegant means of tying in the customer. These three types of developer thus split nine-tenths of the processing customer base between them – an interesting scenario as the trend towards digital cameras and home computer “development” continues to grow.

– 68 per cent will use at least one film this summer

– 16 per cent of adults already have a digital camera

Attitudes to photography % agreeing – a lot a little not much Photos are best way of remembering 76 19 5 times you enjoyed I take most of my photos on holiday 54 18 28 I usually put my photos in an album 50 23 27 I sometimes have enlargements,copies 25 44 30 or special products made from my photos I usually buy the cheapest film I can 16 18 66 Thinking of buying digital camera in 13 12 75 the next 12 months