The pro-life campaining organisation has been protesting against the Advertising Standard Authority’s (ASA) proposal to lift the ban on abortion agencies advertising on broadcast media since March last year.

Although responses to the ASA’s consultation closed in June, SPUC is continuing to ask members to sign its declaration against abortion ads on TV, claiming “allowing abortion advertising on TV for the first time will fuel Britain’s abortion problem.”

John Smeaton, national director of SPUC, says: “The ASA’s proposal threatens to further commercialise the killing of unborn children. It would completely disregard the adverse effect of abortion on women’s health. Agencies with a financial interest in abortion will be in a position to buy expensive broadcast advertising, whereas groups which provide objective information about abortion and its impact on women’s health will be unlikely to afford to advertise.”

In June last year, the ASA faced an all-day protest outside its London offices by pro-life campaigners lobbying against the abortion ad proposals.

The publication of the results of the review of the advertising codes have been delayed due to the volume of responses received and are due to be unveiled early this year.

Sky News has developed a dedicated TV widget for the new Yahoo! Widget Engine to give access to its latest breaking news stories on selected IP-enabled TV sets. 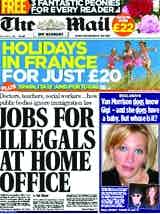 A central database containing customer data across 19 household name brands is to be created. Kerry Foods has appointed Tullo Marshall Warren to build the resource for campaign deployment and customer services as part of an integrated digital and CRM strategy. The data asset and marketing activity will cover sausage brands like Wall’s, Richmond and Porkinson’s through to new brands like Low Low and Mumbai Spice.