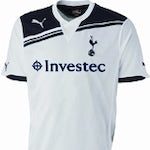 Spurs signed a deal with IT firm Autonomy Corporation last month for its brand to appear on shirts during Premier League matches.

The dual shirt sponsorship strategy, the first employed by a Premier League club, is set to boost Spurs’ commercial revenues.

The club has so far declined to disclose the value of the two-year deal with Investec.

However, the Autonomy deal was said to be worth about £20m over two years, already a significant improvement on the £8.5m per year previous sponsor online casino Mansion paid to have its name on shirts during matches played in all competitions.

Sponsorship experts have said that the strategy offers partners a route to a specific market because of the popularity of English and European club football globally.

Investec, which already sponsors the autumn rugby union internationals at Twickenham and horse racing’s Derby Festival, says that the deal will help increase its “brand awareness through the immense reach of domestic and European cup football”.

The new cup shirt will be worn for the first time during the first leg of the club’s Champions League qualifying tie against Young Boys in Switzerland tonight (17 August).

The home shirt with the Investec logo will also be released for retail sale.

Critics have previously said that the dual sponsorship strategy is simply a cynical ploy to boost shirt sales.