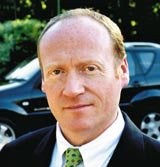 Forbes has a strong background in the UK automotive industry, having joined the Ford Motor Company as a graduate trainee before spending a number of years in management there.

On leaving Ford, Forbes spent 13 years with CitroÃ«n including five as sales director. He left in 2001, as CitroÃ«n recorded all-time sales records for cars and vans, to take the position at EMAP Automotive.

Ssangyong has established a nationwide dealership in the UK over the past two years, but the company is now poised for further growth with the introduction of three models in addition to the Rodius range and the Rexton range, which includes a 4×4 and a 4×4 Sports Pick-Up. One of Forbes’s jobs will be to oversee the doubling of Ssangyong’s network, which currently stands at 53 dealerships.

For the past three years, Ssangyong has sponsored the annual horse trials in Chatsworth, using the connection with the competition to boost its image and sales operations in Europe.

Following publication of the article Role Models (MW June 30), Marketing Week has been asked to point out that Budget Retail has no interest in car rental services or the Budget Rent-a-Car brand.

Cable & Wireless and Energis are understood to be in talks about a merger to create a serious rival to BT in the fixed-line telecoms market.

The International Olympic Committee has appointed TWI to carry out market research aimed at maximising the television and new media opportunities created by the Olympics around the world.