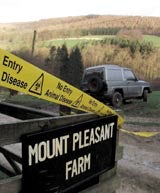 COI Communications has split its standby advertising account between WCRS and Walsh Trott Chick Smith, stripping Ogilvy &amp; Mather (O&M) of the business. The two agencies pitched for the account against Publicis and the incumbent.

COI says the financial value of the account is impossible to estimate, as the agencies will be asked to create work when there is insufficient time to carry out the standard pitch for a piece of the business.

Last year, COI spent more than &£7m through O&M on various emergency initiatives, including a press campaign to inform the public about the foot and mouth epidemic and its implications for rural tourism. The campaign was designed to reassure the public that the countryside was “open for business” despite the foot and mouth crisis.

The agency also created a multi-media campaign to warn parents and children about the dangers of encountering paedophiles on the Internet.

The pitch for the standby business was overseen by Peter Buchanan, the deputy chief executive of COI Communications, who will be taking over as acting chief executive when Carol Fisher leaves at the end of this month.

The account was split between two agencies because Government emergency advertising campaigns demand a quick turnaround of creative solutions for key public policy issues and because Government departments asked for a choice of agencies.