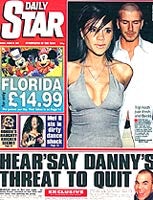 Not so long ago the future of the Daily Star looked decidedly shaky. Lack of investment had made it, along with sister newspapers The Daily Express and Sunday Express, the butt of many a joke on Fleet Street. They were seen as the neglected children of Lord Hollick’s hugely profitable United News &amp; Media.

But quietly the laddish tabloid newspaper began a turnaround under the editorship of Peter Hill, culminating in a reversal in the Daily Star’s once declining circulation.

It was this that attracted the attention of Richard Desmond, who through his company Northern &amp; Shell, bought Express Newspapers for £125m last November.

The new owner has since embarked on a cost-cutting exercise in order to increase financial investment in the newspapers. The latest round of financial streamlining includes editorial redundancies of up to 145 staff across the titles.

Announced last week, the forthcoming redundancies will be a bitter pill to swallow for the editorial team at the Daily Star, which has worked hard to reverse the circulation decline.

The Daily Star had an average net circulation of 547,057 for the six-month period to February, up 6.46 per cent year on year according to the latest figures from the Audit Bureau of Circulations. Circulation figures for the Express titles have seen significant year-on-year declines over the same period.

One circulation expert says: “It’s the [Daily Star’s] news trade figures that are going up. That’s good news. The circulation is not being boosted by bulk sales.

“The regular promotions are bringing in regular buyers and the Daily Star is holding on to them.”

Northern &amp; Shell joint group managing director Stan Myerson is confident that sales of the Daily Star will eventually hit 1 million. He has his heart set on denting the best-selling weekly tabloid The Sun, which has a circulation of more than 3.5 million.

He says the Daily Star is heavily promoted, and claims that the newspaper has spent £1.5m advertising on Sky Sports and £250,000 advertising on TalkSport, with another deal planned with Capital Radio. It also has access to OK! celebrity stories “when appropriate”.

When Desmond took over the Daily Star it already had an editor who was passionate about the newspaper, but Myerson claims it was suffering from lack of investment.

Hill has been at the title since its launch in 1978 and has perfected its laddish appeal by filling the pages with a diet of breasts, celebrities and football. He has also broadened the Star’s readership so it has more than “northern appeal”.

In contrast, many within the newspaper industry believe The Sun is losing its way and appears unsure whether to appeal to the lads or to “trade up” and target young and aspirational readers.

As one circulation expert says: “Other tabloids are trading up and going for the aspirational readership. The Sun will find it difficult to do that when it still has Page 3.

“The Star is now like a mid-Nineties Sun. It’s out-ladding The Sun. It’s stealing its clothes and its readers.”

Myerson has already taken note of this perception within the market. He says: “We are looking to add another ten per cent [to the circulation figures] by the end of the year.

“We’re going to carry on being aggressive – we’re going to bring the Daily Star to a million copies and we’re aiming for The Sun.”

The paper recently poached The Sun’s star football writer, Brian Woolnough, to write for the beefed-up sports section, which has a 12- page football pull-out and 16 pages of sport.

It has also added a Saturday television magazine which has boosted sales on what is traditionally the title’s slowest day. The picture budget has been doubled and the Daily Star’s print run has been increased by 75,000, to avoid newsstand copies being sold out before 11am.

One industry insider says: “The Star has brightened up the national press. It is chipping away at The Sun’s readership.

“Newspaper readership among all the papers is not increasing, so you have to win your readers by gaining market share from you rivals.”

But where does that leave the Express sister titles, amid persistent rumours that they are going to be sold off?

Myerson insists the company remains committed to them and plans to launch a £20m ad campaign to promote the titles later this year.

He says: “Stabilisation is the key at the moment, we are not selling – we are in this for the long term.”

But Lorna Tilbian, media analyst at WestLB Panmure, is sceptical about the company’s long-term commitment to the Express titles.

She says: “Ultimately he [Desmond] is going to have to give them up. It was the Daily Star he wanted all along.”

Tilbian adds: “Desmond is fighting a losing battle with The Daily Mail. I think Associated Newspapers would be quite happy not to make a profit for a year and put it all in to battling it out with the Express.”

Desmond has his work cut out on all sides. Not only must he fight off the attention of Associated Newspapers but if he wants to take on The Sun, then he has a circulation shortfall of 3 million to consider.