The company will launch Cold Brew coffee at the London Coffee Festival and three central London stores on 30 April before a wider roll out across 30 London stores.

The product, originally launched in the US, is made by steeping coffee grounds in cool water. It is the latest in a line of product and digital innovations from the company, which it has credited for strong sales in its latest financial quarter.

Despite foreign exchange headwinds, global net revenues were up by 18% to a record $4.6bn in the company’s second quarter ending 29 March according to its financial results released yesterday (23 April), while global store sales were up by 7%.

It also delivered “the strongest Q2 performance in history” in its EMEA market, with sales and traffic both up 2%.

Speaking on a call with investors, Howard Schultz, Starbucks CEO said Starbucks’ “stellar performance in Q2” was partly driven by “customer facing innovation and the ongoing strength and global relevancy of the Starbucks brand and retail experience” across its markets.

“Innovation is the force that will continue to drive our business and enable us to expand and increase revenues and profits – always through the lens of humanity – long into the future,” he added.

In February, Starbucks announced the launch of its Evenings Programme in the UK market, which will offer a range of luxury food and drink, including truffle macaroni cheese, braised beef and a selection of wines.

On the digital front, in January it partnered with Duracell Powermat to roll out wireless charging in the UK, after announcing the launch of a mobile delivery service in October to deliver what it called “ecommerce on steroids”.

Meanwhile, it says that it added 1.3 million new members to its My Starbucks Rewards membership program in its second quarter, which it credits for increased traffic and sales, while its mobile app now have over 16 million active users.

The company said consumers can expect to see more innovation on mobile in the coming months while My Starbucks Rewards will continue to be “among our most important business drivers”.

“There is no doubt in our mind that delivery like mobile order and pay would drive further incrementality and profitability for the company,” Schultz said. 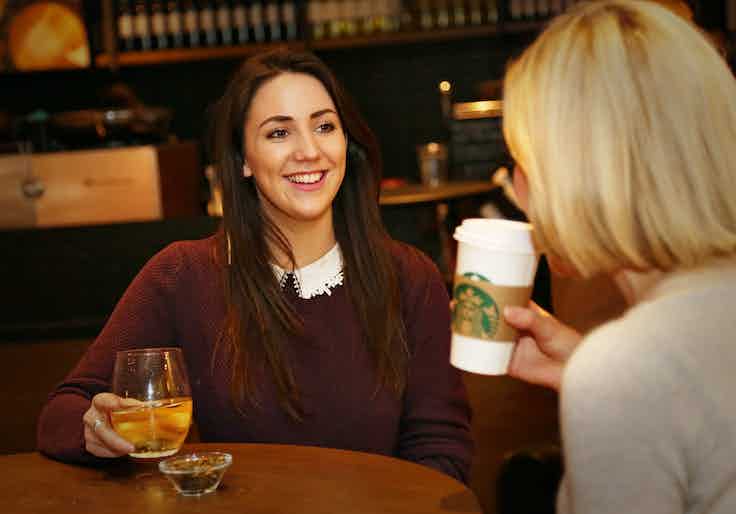 Starbucks is set to launch its Evenings Programme, which will offer a range of luxury food and drink, including truffle macaroni cheese, braised beef and a selection of wines, into the UK market.

Starbucks is to deliver food and beverages to users of its mobile app ordering service in a bid to deliver what it calls “ecommerce on steroids” and maintain its first move advantage in the digital space.