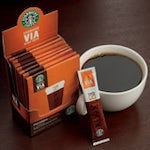 The campaign will begin on Wednesday (10 March) and will be made up of national and consumer print, regional radio and Facebook poll ads.

It will also be promoted via the Starbucks UK Facebook fan page, which currently has almost 300,000 fans. The regional radio campaign will feature comedy double act Punt and Dennis (Steve Punt and Hugh Dennis) to help promote the “superior quality” of Starbucks Via.

To celebrate the national launch, which comes after a regional pilot in London, Starbucks is also inviting 500,000 consumers into stores to try Starbucks Via and take a taste challenge between 12 and 15 March,

Brian Waring, director of marketing at Starbucks UK & Ireland, says: “Although over 80% of all coffee consumed at home in the UK is instant, its quality is increasingly falling short of the rising expectations of coffee lovers. Starbucks Via is the first innovation in instant coffee in decades and this campaign will highlight those things we believe make it stand out from other products available on the market – its superior taste and quality.”