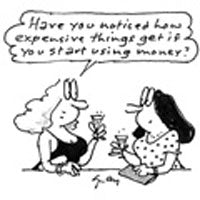 While it is true that the fathomless mysteries of the universe are worth pondering in a spare moment, there are countless matters closer to home that remain unexplained.

Why, for instance, do famous people – celebrities if you will – hold their chins when being photographed? And who is it that politicians wave at? Every time they decant themselves from a car or plane their first move is to throw an arm in the air and waggle it about a bit. I am sure no one waves back.

On the subject of earthly puzzles, there is one that concerns us all – which of us is the more avaricious and stupid, the retailer or the consumer? And who the more blind, the economist or the politician? And all you marketers, don’t go away, you are in this up to your neck.

Britain’s economic miracle – the longest period of sustained growth in recorded history – was built on an illusion, the belief that it is possible to spend more than you earn without anyone ever catching up with you, tapping on your shoulder and extending an open palm. These are the economics of infantilism: like small children, we had only to see something and want it – that’s where the marketing comes in – to buy it regardless of whether or not we had the means to pay for it.

At this point illusion cedes to delusion. We thought we could pay for whatever we saw and wanted because the means to do so came in the shape of plastic, which was not like real money at all but miraculously worked just the same. And if any Jeremiah was foolish enough to point out that credit card spending was ridiculously expensive and fraught with hidden costs we had an answer. “Fie on you,” we would say, “the value of our house is soaring and we are rich. Let no man stand between us and the plasma telly, the £2000 handbag and the boob implants.”

Nor were we without allies in high places and unknown friends overseas. At home, interest rates were kept low, ostensibly to combat inflation but also to fuel the economic fantasy. Abroad, the Chinese were moving workers from the land into the factories, which, thanks to their cheap labour, turned out goods for export at low prices. Meanwhile, we flattered ourselves that we were a service economy, a modern nation whose stock in trade comprised celebrity hairdressers, lifestyle consultants, public relations girls, aromatherapists, party organisers and, standing gloriously at the apex, the personal shopper.

If this was a free market, we exulted, give us excess of it. But yet again we were kidding ourselves. Far from being free we were on a treadmill, and the politicians and retailers were determined to keep us there. Spend, spend, spend, urged the Chancellor – a fellow by the name of Brown – it is your patriotic duty, for shopping is the engine of growth. Spend, spend, spend, echoed the retailers, for our lives depend on it.

And so we spent, and spent, and the faster we dug before us the greater became the mountain of debt behind us. No matter, said the economists with their customary casuistry, the indebtedness as a proportion of income is historically well within bounds, there is nothing to fear.

Economists, however, base their reasoning on the assumption that all other things remain constant. That is their delusion. Inflationary pressures, the rising price of oil and food, the credit crunch and the end of cheap money, all these proved that the only constant is inconstancy. Taken together, these forces acted on the consumer like a bucket of cold water thrown in the face of one who is asleep. The dream was shattered, pleasure became pain, and the awful shadow of that debt mountain darkened the sky.

But illusion is not that easily discarded. Even as the shoppers awoke from their coma and with great restraint struggled to keep their credit cards in their pockets, siren voices urged them to get back on the hamster wheel. The Christmas retail sales figures were pored over like ancient runes, the observers hoping to divine their meaning. The fortunes of the shopkeepers were seen as emblematic of the fortunes of us all: were a single grocer to fall by the wayside the heavens would wreak revenge. “Press on, press on,” cried the voices. “Cut interest rates, bring back cheap money, come back to the High Street, you shoppers, this is no time to falter, your country needs you.”

Personal insolvency and bankruptcy is predicted to increase by 15% this year. Time, then, to raise a statue to the Unknown Debtor, the man who laid down his wallet for his country and had his plasma telly repossessed.

Estee Lauder, the cosmetics and fragrances giant, has restarted the review of its £70m global media planning and buying account. It will include the company’s £10m UK account, which is currently handled by M2M. It is understood that Omnicom Media Group-owned M2M to be repitching for the business against WWP Group-owned Maxus, and MPG, part […]

Charlton Athletic is seeking a new sponsor after its deal with Spanish property company Llanera was scrapped when the company went out of business. It is the second time the football team has lost its sponsor to bankruptcy. Llanera filed for insolvency in October after its plans for a development project, targeting ex-patriots in Murcia […]

COI has appointed Chris Wood, the chairman of Corporate Edge, as its second non-executive board director. He will join the management board immediately and will advise Whitehall on delivering effective communications. Wood, appointed by COI chief executive Alan Bishop, will join Marilyn Baxter, formerly of Saatchi & Saatchi, who was appointed to the role in […]