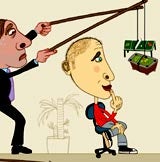 Recent research, by marketing and advertising recruitment consultancy Hays Reed Carroll, reveals that employers are having to work harder than ever not only to attract staff, but to keep them.

In a survey sample of 346 candidates, a fifth of respondents said that they move company each year. The findings suggest that people change jobs more frequently now, in part because of new industries such as dot-coms.

While the financial package remains the most influential factor in people’s choice of job, the research found that it is increasingly important for companies to offer staff incentives both to persuade people to join, and then to stay with, the company. Topping the list of incentives was equity in the company.

In relation to the marketing communications sector, many of these findings ring true. Barry Winter, director of personnel and development at Countrywide Porter Novelli (CPN), admits that the sector was affected in the early part of 2000 because people, particularly public relations (PR) staff, were moving to dot-coms. However, this trend came to an end around May, when the Internet bubble burst.

Winter says the main impact that the dot-coms have had on his company is to change the way it attracts staff. He says: “It became very obvious how dot-coms were attracting and retaining people. Part of it was risk and excitement, and the possibility of making a lot of money. But these companies were managed in a way that gave staff a lot of freedom, and the style and working environment was quite different.” This should act as a point of reference for all marketing companies.

CPN has since tried to make its working environment more fun. Some of the meeting rooms are painted in themes, and there’s a staff area with a pool table and table tennis. It has also altered its management style to enable greater flexibility and more freedom for staff.

“People were also moving because they saw greater career opportunities elsewhere,” adds Winter. “So we launched a programme of one-to-one interviews to find out what staff were interested in.”

When it comes to finding staff, recruitment agencies are still the favoured option with the majority of marketing companies. Trainee schemes are also suggested as a good way of getting people in at entry-level – the thinking being that by showing commitment to staff early on, they are more likely to stay.

It is also apparent that there are simply not enough good people to go around. This can, in part, be attributed to the fact that marketing is growing at a faster rate than people are joining the industry. Some agencies suggest it is increasingly difficult to attract the best young talent because many graduates are looking for better financial rewards in careers outside marketing.

Paul Gordon, managing director of advertising agency CCHM, explains: “In a boom economy, it’s a challenge for agencies to get hold of the right people – and that’s an industry-wide problem at the moment. You really have to be in love with advertising to accept a starting salary of &£15,000 a year. Salaries must be higher if the marketing industry is to attract the best graduates.”

Pushed to the sidelines

Gordon suggests many graduates want to make their way into e-commerce these days and, because it is seen as part of IT, marketing is in danger of becoming an increasingly marginalised function. He says: “IT is hugely important to many corporations now. It’s all about Internet-enablement and in many companies marketing isn’t even contributing to that debate.”

He argues that agencies are also losing out to the big consultancies, which are perceived to be more glamorous. “One suspects that blazing a trail with Bain &amp; Co is more attractive than a three-year slog to make brand manager on a vastly inferior salary,” he says.

Consultancies are also more attractive, because they deal on a more senior level with client companies. They provide contact with chief executives of big FTSE-listed companies, whereas ad agencies typically deal at a lower level. And, because they cannot compete on salary levels, Gordon suggests that agencies need to champion the fact they are actually good places to work.

He says: “Ad agencies are incredibly fun, bright, dynamic and creative environments to work in – which is unparalleled. We need to make people realise that.”

In terms of staff retention, companies appear to be making far greater efforts to keep their best people. Keeping staff is far more important these days since there is such a sparse pool of well-trained marketing professionals.

Bob Wood, joint managing director at York-based marketing agency Teamwork Marketing, explains that his company has completely redeveloped its training programme in the past year in an effort to boost staff retention.

He adds: “In a small agency there’s always a perceived ceiling, but we try to show people that working here is going to be beneficial to them, even if they can’t see the ladder. We’re always straight with them and don’t make promises we can’t fulfil.”

Internet company Inktomi also has a scheme in place that is specifically aimed at encouraging staff retention. On a quarterly basis every person is set MBOs (management business objectives) – and if they achieve these goals, they receive rewards such as additional shares in the company.

“The intention of the MBO is to put in place individual objectives that drive behaviour and, if people get rewarded based on that, it’s a clear motivator,” says Steve Wastie, Inktomi’s director of marketing, network product.

Wastie suggests that many companies are demotivating staff by only conducting annual reviews. “The only way you’re going to keep good people is to keep challenging them, to have a meritocracy in place, to empower people to take the odd risk and make sure they receive regular rewards if they’re successful,” he says.

Brand experience consultancy RPM has developed some similar initiatives. It has followed the dot-com example by taking a percentage of the business and putting it into an employee trust in the form of stock options.

RPM managing director Ross Urquhart says: “It’s given to the staff based on length of service, so when we reach the stage of a trade sale or a flotation on AIM or Ofex all of our staff will feel they have something that’s building in value.”

The company also invests in training and development schemes covering management, creative and personal training initiatives – even paying for training that may not have a direct benefit for the company. An experience fund has also been set up with &£1,000 set aside each month and employees put forward suggestions about what they want to experience. In November, for instance, the company sent two people to the Ice Hotel in Lapland.

The reason marketing professionals move around tend to be less about salary and more about opportunity. That said, a motivational scheme that is financially-oriented, such as Inktomi’s, goes a long way to ensuring a company holds on to its staff. But clearly not everyone is entirely motivated by money.

The things that retain staff are often very intangible and apply as much to marketing as they do to any other profession. It’s about the style and culture of the workplace and the ease of working there.

The dot-com exodus has stopped now – in fact, many that jumped ship are returning to the agencies. But best of all, many agencies appear to have learned valuable lessons about the approach to working environment from the Internet start-ups, and are now thinking far harder about how to motivate staff and what incentives to give them. Surely, that can only aid companies in their quest to first find, and then retain, good people.

Marketing has never been the watchword of train operators but that will soon have to change. The Hatfield rail crash has opened the train companies’ eyes to the importance of passenger perceptions, and the recent cut-price tickets initiative o

The Procter & Gamble-backed teen girl website, swizzle.co.uk, has shut down almost a year after its much-hyped launch.