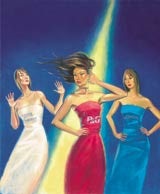 While hair fashions constantly change, the market that produces hair products has traditionally been a bit of a millpond. Rarely has it seen so much upheaval as in recent years, with Procter &amp; Gamble quietly but efficiently taking control of the £1bn sector. To defend their turf, specialists in the sector, such as L’OrÃ©al, will have to raise their game to take on the multinational interloper.

P&G now owns the top brand in each of the three haircare categories, with Pantene in shampoos/conditioners, Nice ‘n Easy in colourants and, as of last week, Shockwaves in the styling category following the completion of P&G’s takeover of Wella (MW last week).

The move from marginal player to industry heavyweight in four years has been swift work for a company with a reputation for slow, methodical planning. And industry sources now say the company plans to throw millions of pounds behind its brand leaders to ensure that its traditional competitors, including L’OrÃ©al and Alberto Culver, are squeezed, and that Lever FabergÃ© – which signalled its intention to compete with the launch of Sunsilk last year – fails to improve its market share. As one P&G source puts it, 2004 is going to be the company’s “year of beauty”.

P&G brands now account for more than a third of sales in the £536m shampoo and conditioners market, with all the company’s major brands outpacing the 7.2 per cent growth in the market (by value) over the past year.

These performances will be bolstered this year by major brand revamps, including a plan to invest £6m in the relaunch of Pantene, which will be rebranded as Pantene Pro-Health. Another £2m has been earmarked for the launch of the first major variants under the Head &amp; Shoulders brand (MW June 10).

P&G’s strength in shampoo is now mirrored in the £275m styling market, with Shockwaves vying for first place with Alberto Culver’s VO5 Styling range. One retail source says this situation is unlikely to continue for long: “P&G will hugely increase investment in Shockwaves, which should change the face of the market. This is a sector where £2m is a big annual media spend, and that is small change for P&G.”

While L’OrÃ©al has the lion’s share of sales in the £185m colourants market, P&G now owns by far the largest brand, with Nice ‘n Easy. A retail insider worries that all three categories are now in P&G’s thrall: “Haircare is a market that could quite easily become dominated by one player and that is a worry for retailers and consumers, particularly if that player starts abusing its position.”

Former P&G haircare marketing chief Gill Whitty-Collins talks bullishly of the company’s position in the market. She explains that P&G is in the second phase of its drive to compete in the health and beauty market, the first step having been the acquisition of Clairol in 2001.

She says the Clairol deal was the tipping point for P&G, giving the company leadership in colourants and boosting its shampoo presence with Herbal Essences. “We became the number one beauty care company in the UK overnight. It was the breakthrough moment, as until then we were up against the huge heritage of L’OrÃ©al. Now we sell £500m at retail every year,” she says.

“We are now the market leader,” Whitty-Collins continues. “Our actions have hit L’OrÃ©al hard in shampoos and conditioners, while Lever FabergÃ© is still a smaller player in the overall haircare market.”

L’OrÃ©al has an 11.3 per cent share of the shampoo market, down from 18 per cent in 2001. It has been pushed into third place by Lever FabergÃ©, which now has 13.9 per cent. One source says that L’OrÃ©al needs to act fast before it comes under even greater pressure – sales of Elvive are down four per cent year on year. He adds: “Lever FabergÃ© has re-emerged as a major player with the launch of Sunsilk and Dove, forcing L’OrÃ©al further behind.” 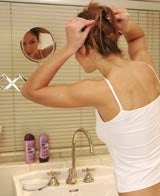 However, there are signs that L’OrÃ©al will put up a fight. The company will unveil a multi-million pound rethink of Elvive later this year, which will see a change in packaging and the launch of an anti-dandruff variant. But the relaunch could be spoiled by the similarly big-budget revamp of P&G’s Pantene, which occupies the same “premium mass” positioning as Elvive.

According to one industry expert, L’OrÃ©al is again a step behind P&G and Lever FabergÃ©, whose marketing tactics have been honed by years of fighting each other tooth-and-nail in the detergents market. He points to other haircare trends in the market that L’OrÃ©al has been slower to exploit. Products are increasingly “indication-specific”, he says – an example of this is the success of last year’s relaunch of Sunsilk, with its particular uses such as removing frizz. He adds that L’OrÃ©al is catching on with recent launches such as Elvive Non-stop Volume but believes the company is still lagging behind.

Alberto Culver, a smaller player in the shampoos market – its Andrew Collinge brand has a market share of just 1.4 per cent – is following suit. The company has marked its intention not to be edged out of the sector with the launch of its first major mass-market shampoo brand, Tresemme, which again targets specific hair types (MW February 12).

The company has earmarked £20m for an ad campaign that will break in the autumn, with some £8m dedicated to television alone. A retail source says that, if successful, the company could further dent sales of Elvive and even challenge Pantene.

Crucially, adds the source, Alberto Culver has realised the key to surviving in the haircare market is money. He points to the demise of P&G’s Vivality and Lever FabergÃ©’s Organics, which are being lined up for the chop (MW April 24, 2003; MW July 8). He says the brands did not stand a chance after advertising support was pulled.

“The key to the shampoo market is high investment, as can be seen from the examples of Organics and Vivality. Once the ad spend dropped, that was the end of them. Not much beats a £15m TV campaign, as the products on their own are not different enough to ensure loyalty.”

Taking too much off

The difficulty in establishing brand loyalty has also been reflected in fierce “every day low price” wars and promotional campaigns that have seen value sucked from the market as the players fight to gain market share.

However, Stephenson says the market has seen the return of some value with the advent of more “added benefit” products. “We’ve seen heat lifted from the market and promotional discounts haven’t been as deep in recent months,” he says.

The return of value to the market also reflects attempts within the industry to try to instil brand loyalty. Stephenson says Sunsilk’s marketing has attempted to create an “emotional” connection with its customers. He says: “Sunsilk addresses women’s real-life hair dramas, talking to them in their own language. It is about providing a solution to the hair drama.”

Likewise, according to one source, P&G’s marketing tactic for shampoo is to bring “hope in a bottle”. Whitty-Collins agrees women want to love their brands as much as trust them. “While P&G really believes in science and technology, we recognise that consumers want an emotional connection”.

But Euro RSCG board account director Lisa Bamber, who looks after Alberto Culver, says P&G and Lever FabergÃ© have failed to create any strong emotional attachment, as their advertising has become too formulaic.

However, says John Frieda UK general manager Victoria Wade, products at the premium end of the market have been able to create a greater degree of loyalty through effective, aspirational advertising, as well as by addressing specific needs.

Evidence of this is the remarkable growth of John Frieda over recent years – it is now the third-largest franchise in the shampoos market. The brand posted a 16 per cent growth last year, to take 7.7 per cent of the market.

Whitty-Collins also believes there is scope for further growth in the premium end of the category. P&G picked up the Nicky Clarke brand as part of the Wella deal and Whitty-Collins says this is one of the most exciting aspects of the acquisition.

She adds company research suggests that consumer awareness of the Nicky Clarke brand is significantly higher than that of John Frieda, namely 83 per cent compared to 61 per cent. “We are working very hard with Nicky Clarke. We see the premium end as a huge opportunity and there will be a lot of changes.”

Ultimately, says one haircare expert, it is hard to see how P&G can fail to dominate – the company owns the leading brands across all three categories. Only L’OrÃ©al, he says, has the presence in all key areas of the market to compete with P&G, but the company needs to be tougher. “L’OrÃ©al could push P&G but is not at the moment. There are the makings of a good fight, but L’OrÃ©al has to get dirty.”