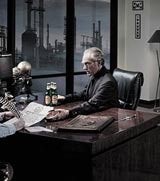 Stella Artois is behind a mysterious online game in which players are offered the chance to sell their souls to the devil. In the game, players follow clues posted on a variety of websites, in e-mails and in above-the-line ads to win a prize of &£10,946.

Both Stella and Draft London, the through-the-line agency that owns the websites involved, declined to comment. An Interbrew spokesman says: “I can’t confirm or deny whether we are involved in this internet game.”

Such puzzles – known as alternate reality games (ARG) – are modern hi-tech versions of the famous 1979 children’s book, Masquerade, which offered a golden hare worth &£5,000 as a prize and sold a million copies.

It is unclear when the Stella Artois game began, but it seems to be reaching a climax this month. It is also unclear how much attention it has attracted so far, and what impact it might be having on Stella’s brand image. While it seems to have a cult following among ARG players, not all of them appear to understand that it is designed to sell Stella.

The game links in with ads that Stella started running in the style press in July, featuring black and white images by Dutch photographer Olaf Veltman telling a story about a man selling his soul. It is unclear, though, whether the ad campaign and the game were developed together, or whether one sparked off the other.

Ads on various websites link to an online newspaper, the Hornchurch Star, where further links eventually take players to a shadowy organisation, Sable &amp; Shuck (www.sableshuck. com), which offers to buy players’ souls. There are obvious hints of Stella’s involvement in the websites – for example, the Hornchurch Star reviews a film identical in plot to the latest Stella “pilot” ad.

Ad industry insiders suggest that the campaign is intended to bring the brand back upmarket – its “reassuringly expensive” campaign has been hit hard in recent years by heavy supermarket discounting.

ARGs, with their clues hidden in press, poster and TV ads, on websites, on voicemail systems and in text messages, have been used for a number of marketing campaigns recently, including “The Beast”, used to promote Steven Spielberg’s 2001 film, AI; and I Love Bees, which was linked to this month’s launch of the Microsoft Xbox game, Halo 2. Half a million players logged on to the I Love Bees website every week for updates.

Closer, the experiential marketing agency, has created a campaign to support the launch of Peperami Firestick. It will include a sampling campaign at key sports events to target its key market of 18- to 30-year-old men.

Bacardi-Martini has appointed Leagas Delaney to handle its multi-million pound pan-European account for vodka brand Eristoff. The non-roster agency won the business after a pitch against several undisclosed European agencies. The appointment was overseen by Eristoff global brand director Jeff Macdonald, and marks the first time the brand has hired a pan-European agency. Eristoff is […]