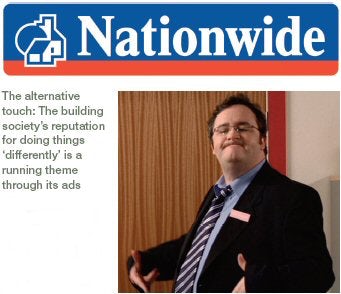 The newly created £150bn financial giant will become the UK’s second-largest mortgage lender, dislodging Abbey, and it plans to add more branches and products to its name.

The fact the more historic Portman name will disappear under the plans is testament to Nationwide’s stronger brand awareness and greater high street presence.

The tie-up means Nationwide – already the only mutual able to take on publicly listed companies – can further boast its “alternative banking” credentials.

Indeed, announcing the deal, Nationwide chief executive Philip Williamson was adamant that the transaction is not a prelude to a demutualisation and a stock market listing of Nationwide. “Both boards are passionate about continuing with the mutual business model,” he said.

As Jo Parker, managing director of financial services specialist agency Teamspirit, says: “The beauty of what Peter Gandolfi [head of brand marketing] and his team have done with the Nationwide is that it grows with this opportunity.”

Nationwide’s ongoing advertising, created by Leagas Delaney, prides itself on the strapline “Proud to be different” and leverages its marketing on how it does things better than banks. Campaigns starring comic actor Mark Benton as a hapless bank manager have illustrated such differences as free cash machine use abroad and new products being available to existing – as well as “brand new” – customers.

Parker continues: “They have built a brand that feels inherently close to customers, with strong empathy and understanding that customers like to be treated well and fairly, not just when they are new, but on an on-going basis.

“This is different from the majority of high street players and backs up the brand’s claim that it is ‘proud to be different’.”

Yet, as commercial and treasury director Stuart Bernau acknowledges, mutuality is a hard sell. “It is difficult to market around mutuality but by focusing on being ‘different’ we are picking a line that clearly shows our advantages over banks. We don’t behave like they do.”

The Mark Benton campaign is generally believed to have worked well for the building society although one advertising executive warns Nationwide risks associating itself with the bad behaviour it derides.

He says: “The executions are very funny, and have worked well for it, but the longer it continues the more people will subconsciously associate bad business practice with Nationwide.”

Bernau cautiously agrees. He says that although the campaign is working “very well” at present, Nationwide must avoid boring people or not evolving the marketing message. “We are very mindful that we will have to continue looking at it,” he says.

The building society is also a long-standing sponsor of sport – echoing its rivals’ ambitions in the same sphere. Earlier this summer it signed a shock four-year deal with the Football Association to become sole sponsor of the England team just months after it walked out of talks to extend its six-year relationship.

Bernau says Nationwide was willing to walk away from its sponsorship and that the FA had been holding out for a bigger deal for a solo sponsor. However, with a poor World Cup performance and no sponsor in place, the building society was able to “negotiate a pretty sharp deal”. Nationwide also sponsors other home nations and the Mercury Music Awards, which Bernau says taps into the younger market.

Such prestige deals are important to the success of the brand, he says, because they show Nationwide is a credible alternative. “If you want to stand as an alternative to the high street banks you have to be and act of a certain size and be a very modern organisation; it is no good being seen as a ‘woolly jumper’ sort of organisation,” he adds.

Dangers do lie ahead: if Portman members give the go-ahead there lies a period of integration, streamlining and rebranding – while keeping their eye on rivals’ activity. As Parker says: “They just need to make sure their focus is on the long term and that retaining customers remains across the newly merged business. It’s as simple and as difficult as that.” Pride, it pays to remember, comes before a fall.

• The name Nationwide was launched in 1970 after a demerger from the CWS. The name was borrowed from the BBC current affairs programme, Nationwide
• The Portman name, which will disappear under the merger, dates from 1846
• Nationwide merged with Anglia Building Society in 1987. The new society was known as Nationwide Anglia, but Anglia was dropped in 1992.
• In 2006 Nationwide’s assets reach a record £120.6bn for the year ending April, with pre-tax profits of £539.4m.