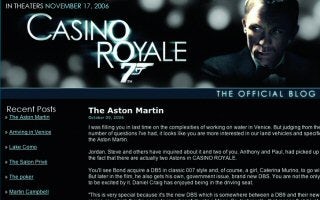 Along with the barrage of banners, 60-second trailers and the inevitable round of star interviews, some film companies are using the internet to experiment with other marketing methods that not only entertain, but also involve the audience.

“Online film marketing has changed a great deal in the past year,” says Jonny Green of Franki&Jonny, a film marketing agency in London. “Alongside community sites and fan forums, blogging is now an important way of making an audience aware of a film as soon as possible.”

Despite the millions of pounds spent on film marketing, the success or failure of a film still relies largely on word of mouth. Film blogs can tap into that conversation long before a more traditional marketing campaign can have any effect.

“Do we really need another site with a few pretty pictures and crappy interviews with the actors who just talk about how lovely it was to work with so-and-so? No, we don’t,” says Gia Milinovich, who writes a blog for Sunshine, the new film from Trainspotting director, Danny Boyle.

Going one-on-one
“What we’re doing is allowing people into the film-making process,” explains Milinovich. “Blogging provides a one-on-one relationship between the fans and the filmmakers, which I hope will encourage more loyalty than, say, seeing an ad on the side of a bus.”

The Sunshine blog has received over 750,000 unique visits and is the most expensive website that Fox Searchlight has ever produced, although, according to Milinovich, it is still cheaper than one television spot on US network TV. The content of a film blog depends on the type of film, according to Green, whose company is behind the blog for a low-budget feature called Sugarhouse Lane. “Low budget, independent films will tend to contain more behind-the-scenes information, as this will interest budding filmmakers. Bigger films with a known cast will rely on the status of their stars to attract attention,” he says. For example, the forthcoming James Bond film, Casino Royale, has no viewer interaction, but most in the blog world see interactivity as key to success.

A very long engagement
“We are working across many sites and building a network that will make the online presence of the film formidable,” explains Colin Kennedy, who is working on the blog for David MacKenzie’s forthcoming film, Hallam Foe, at getyourpeople.com. “We have been able to engage an audience far earlier in the process than would happen with traditional media, where the audience is targeted in the last few weeks prior to release.” Hugh Macleod, who helped create the Hallam Foe blog, worked on a previous MacKenzie film, Young Adam, in 2003. “With Young Adam, the blogosphere was two-hundreths of the size it is now. The blogosphere is a lot bigger, a lot more mature and it gets a lot more interest from the outside world,” he says.

Macleod has also been moving the blog into the real world. In early October, he invited 20 bloggers to meet MacKenzie and others at a Hallam Foe preview screening.

Keep them talking
“Bloggers have been allowed to preview films before, but this was a bit different. The bloggers got to see a rough cut. We put the director, some film people and the bloggers into the same room,” says Macleod. “We don’t know what will come out of it. You just have a feeling that if you connect with people they’ll connect back. This was just one evening. This was the start of a conversation. It wasn’t the entire conversation.”

Such viral marketing is notoriously volatile. “With a big blockbuster, you have $100m (£54m) or more for a marketing budget, but the virus can work against you, as Waterworld found out. That film went viral, but the virus was, ‘Hey, this movie’s shit’,” says Macleod. “If you have a good movie, you don’t have such a problem. I still think it’s virgin territory. I think we’ll see a lot more in 2007. In 2006 we’re still making it up as we go along.”