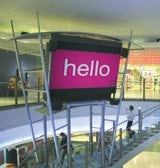 June was a reasonable month for the UK stock market overall and the media sector in particular, with some spectacular share price increases and falls at the individual stock level.

The market’s robustness was in spite of mounting evidence of softening consumer spending. Contributing to its strength was a shift in general expectations of the direction of UK interest rates from further rises towards reductions. As well as being a stimulus to consumer spending and the flagging housing market, this would increase the relative attractiveness of the yields from listed equities.

The star-performing sub-sector was Free-to-Air TV, which rose 7.5 per cent during the month, driven by the performance of ITV. Free-to-Air TV is now the best-performing media sub-sector in the year to date, up 16.3 per cent, which might seem surprising given the backdrop of lacklustre ratings and a weak advertising market. However, two big stories have driven ITV’s performance this year, both of which were to the fore in June. Firstly, Ofcom outlined new licence terms for Channel 3 that were more favourable than many observers had expected, with ITV likely to pay less than &£80m in 2005, compared to &£215m in 2004. Secondly, bid speculation resurfaced – unsurprising, given that it was unlikely that any potential predator would move ahead of the confirmation of the new licence terms. This uncertainty has now been removed.

The only other sub-sectors to make progress in June were Pay TV (up 1.9 per cent) and Professional Publishing (up 0.7 per cent). The Professional Publishing (including Pearson, Reed Elsevier, Reuters Group, T&F Informa) and Pay-TV (BSkyB, NTL, Telewest) sub-sectors have both been solid performers in the year to date, up 9.1 per cent and 2.9 per cent respectively, reflecting their proportionally high subscription and other non-advertising revenues, which are viewed by investors as offering defensive qualities relative to more advertising-exposed sub-sectors.

The month’s worst performer was Entertainment &amp; Content (down 1.3 per cent). Music company Sanctuary Group’s profit warning and share-price collapse was a factor here. However, in the year to date it is Radio &amp; Outdoor that has been the worst performing media sub-sector, reflecting some dire recent radio advertising statistics allied to an evaporation of bid premium as the final rounds of industry consolidation begin, with EMAP’s long awaited takeover of Scottish Radio Holdings confirmed.

Consumer Publishing, including the likes of Daily Mail &amp; General Trust, EMAP and Trinity Mirror, has also been weak so far this year, with the sub-sector down 5.9 per cent. Like radio, weak advertising has been a contributory factor, but in addition there are rising concerns about the business models of newspapers and some magazines in the face of the trend to increased online media consumption. In the case of magazines, there are also concerns about the impact of potential distribution deregulation, which could jeopardise the viability of numerous low- circulation titles.

Entertainment Rights, the creator and developer of children’s brands, had another strong month. Its share price was up 19 per cent, buoyed by news of new distribution agreements for Postman Pat. The shares are the overall media sector’s best performer in the year to date, up 123 per cent.

Exhibitions, conferences and publishing group Tarsus responded positively to news of acquisitions and a confident trading statement, while Centaur Holdings (publisher of Marketing Week) also had a strong month.

Music company Sanctuary Group had a difficult month, with its market capitalisation shrinking by more than half, on the back of a warning that first-half profits would be depressed by significant slippage of record releases to the second half of the year, allied to investor concerns about the group’s debt levels.

GCap Media (the product of the recent merger of Capital Radio and GWR Group) has had a difficult inauguration, depressed by news of weak advertising demand. Investors are questioning whether this is purely cyclical, or whether radio’s days of gaining advertising market share are over in the face of online’s inexorable rise. Stream Group, the provider of mobile phone content, rose on bid speculation, while shares in Avanti Screenmedia, a leading provider of in-store screen services and content, responded positively to news of its largest contract win to date. Sales promotion company Felix Group rose on the back of confirmed speculation that it was in negotiations to develop a high street retail presence.

In contrast, interactive entertainment group YooMedia plummeted after releasing a profits warning, while The Local Radio Company was caught up in the general gloom regarding the radio advertising market. v

The IBIS Capital Media Indices are a set of proprietary analytical tools developed to monitor the performance of the UK media industry with regard to the share price performance of publicly listed companies.

IBIS Capital, which is a corporate finance advisory and investment business focused on the media sector, established the indices because the diverse nature of the media industry makes broad performance measures of limited value when trying to understand the dynamics of stock market performance. For instance, the prospects for advertising are of limited relevance to a subscription-based publisher or a music company but matter greatly to other media companies, and while paper prices are crucial to some, they are irrelevant to others. Investors do not “buy” or “sell” media. Instead they tend to “switch” investments within the sector according to which companies meet their criteria.

The IBIS Capital Media Indices group companies with similar business models into sub-indices. Over time, significant variations in the sub-sectors’ performances can be seen. The indices also include a split between media companies fully listed on the London Stock Exchange and those listed on the Alternative Investment Market (AIM). The junior market, with its less stringent listing requirements, has been enjoying a relative boom in investor interest, and many media companies have become listed on it. However, fashions change, and when the AIM does suffer a setback, its lack of liquidity relative to the Stock Exchange means that it is likely it will underperform the senior market. The IBIS indices will highlight the relative performance of the two markets and may give an early indication of when there is a change of direction.

As well as being of interest to those concerned with the performance of the UK’s media industry and its sub-sectors, the indices are useful to directors considering a flotation of their own company, or for anyone else considering the purchase or sale of a media company or shares.

The indices monitor all UK media companies listed on the London Stock Exchange and on the AIM with a market capitalisation over &£10m, although there are some companies that are listed that are on overseas exchanges, such as NTL and Telewest (both Nasdaq) and Reed Elsevier, which has a listing that is split between the London and Amsterdam exchanges.

The indices are based on the market capitalisation of each constituent company but, in common with the practises of other recognised stock market indices, they make various adjustments.

Factors taken into consideration in the compilation of the indices include: changes in the share prices and number of issued shares of the constituent companies; the number of shares in free float – that is, theoretically readily available to be traded (not held by a controlling shareholder/concert party); it should also be noted that companies with limited free floats have their weightings adjusted in line with guidelines applied to the FTSE indices.

Because of Reed Elsevier’s split listing in London and Amsterdam, the index combines both market capitalisations to give Reed Elsevier its full weighting as the largest UK-based public media company. Other companies, such as Daily Mail &amp; General Trust and Haynes Publishing, have separate classes of “ordinary” shares, which need to be taken into account.

The effect of initial public offerings (IPOs) bringing new companies into the indices, and of mergers and acquisitions, which may take companies out of the indices or create new companies, are also considered.