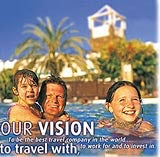 The package holiday industry is preparing for a shake-up as it faces the reality that demand for its products has slowed. The first casualty doesn’t look too far away, as the UK’s biggest tour operator, MyTravel, has been forced into a fight for survival.

The economic slowdown, aggravated by people’s anxieties about travelling after the terrorist attacks of September 11 and now Bali, have contributed to the dip in demand. But the trend was already under way for a travel industry criticised for being locked in the past, catering for families with two children that want to take a sevenor 14-day break. Society has evolved, as have people’s expectations of holidays, but the travel sector has failed to take that on board.

The package holiday market has reached maturity, slipping back to single digit growth in the past decade. Experts predict that growth will drop to between five and seven per cent for 2002.

Included in the ONS figures are the high-end operators that offer tailor-made breaks, such as Kuoni or Mark Warner Holidays, as well as the traditional mass-market operators to “summer sun” destinations. The mass market is dominated by four major tour operators, which together hold 50 per cent of the market in 2001 – Thomson Holidays, owned by TUI; Thomas Cook; First Choice; and MyTravel. It is the mass-market product, which relies on small margins and economies of scale to produce a profit, that is most under threat from changing consumer trends and demographics.

Low-cost airlines have also had an effect on the industry, encouraging bolder holidaymakers to put together their own holiday packages. In addition, the sector faces pressure on its cost base in the form of rising hotel rates in Spain, a country which has seen vast improvements in its economy. Spain is the leading destination for UK holidaymakers and took 42 per cent of the package holiday market in 2000. Operators are faced with the dilemma of cutting already slim margins or passing on the price rise to customers. Cost-conscious holidaymakers have also noticed that the power of their spending money has reduced in Spain, and the tour operators, recognising this trend, are pushing Greece and Turkey as alternative destinations.

The industry’s bottom line is also being squeezed by the need to invest in multi-distribution channels, from retail outlets to websites and call centres, as well as the habit among consumers of waiting for late bargains.

But the biggest upheaval comes from two social trends – the growth in single people and older citizens; and the fact that holidaymakers are becoming more adventurous and are demanding more choice.

Most operators made attempts to adapt to the changing market by cutting the number of holidays on offer during 2002. Thomas Cook and First Choice announced they were taking out ten to 15 per cent of their supply for summer 2002, while Thomson Holidays also cut its supply. MyTravel, which owns the Airtours, Manos and Cresta brands, is not believed to have made similar adjustments.

Morgan Stanley analyst Jamie Rollo says: “MyTravel messed up in its predictions for demand in 2002. If you don’t sell the holidays, it hits your bottom line.”

Insiders suggest that MyTravel has also been plagued by bad management decisions after founder and chairman David Crossland delegated key responsibilities. Crossland is due to retire this year but he has been thrown back into the fray after chief executive officer and former finance officer Tim Byrne was squeezed out. Accounting practices have also been called into question and there appears to be a &£65m “black hole” in the figures. Meanwhile, the company is trying to renegotiate a &£250m credit facility.

Rollo says it is unlikely any of its rivals will buy the entire company, as the buyer would inherit a large debt, and rivals stand to pick up customers for free if MyTravel collapses. MyTravel’s results are expected on November 26.

Observers have drawn a parallel between MyTravel’s troubles and the collapse of International Leisure Group (ILG) after the Gulf War in 1991. But one tour operator senior executive points out that ILG unravelled overnight while MyTravel has time to renegotiate with its bankers and produce a survival strategy. Rollo adds that ILG’s crash reflected deep industry problems, while MyTravel appears to be suffering from poor management.

One industry consultant says it will be no surprise if MyTravel does fold, as the industry is saturated with operators. Consolidation will stem the battle to steal share by aggressive pricing and allow operators to increase prices by sensible management of capacity. But Thomas Cook commercial director Paul Wedgwood says: “It’s a very competitive industry and there’s not a lot of room for slapping on high price increases.”

It’s also a market that attracts new players and others that are keen to expand their product base from city breaks to mainstream holidays, such as the Air Miles Travel Agency.

But one threat to the package industry which may have been overplayed is that from the low-cost carriers. TUI communications director Sonia Davies points out that only five out of 105 routes flown by its charter airline Britannia compete with budget airlines. The European Commission is also considering new compensation levels for disgruntled passengers of low-cost carriers which, if introduced, could lead to ticket price rises, thereby reducing their threat.

To ensure long-term survival, package tour operators will have to become more flexible. They are unlikely to throw out the cost-efficient traditional sevenand 14-night package holidays, but they can break down the cost of holidays, enabling customers to pay extra, for instance, for in-flight meals, coach transfers and sea-view rooms, as Thomson Holidays and Thomas Cook have done with some of their brands.

Such innovations could muddy one of the strongest selling points of a package holiday – its simplicity and ease of purchase. But the tour operators will have to find some kind of trade-off with consumers’ increasing demand for variety and choice if they are to survive.