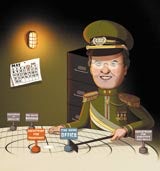 Just weeks from the General Election, the Government has been saved from one embarrassment at least. In this instance, the blow was not expected to come from Her Majesty’s Opposition, but from a source closer to the root of power – Whitehall.

Rumblings of discontent have been emanating from one particular government department in recent months, which have threatened to erupt in the middle of the General Election campaign. The Home Office, which spends &£5.8m a year on advertising, has been questioning the ability of COI Communications (the COI), the government unit which runs advertising for most departments, to obtain best value for money (MW last week). The COI spends &£157.6m a year on advertising. The Home Office has even threatened to follow in the footsteps of the Department for Transport (DfT), which broke away from the COI three years ago, and to appoint its own roster of media and advertising agencies with the hope of getting a better deal by going it alone.

When the DfT went its own way a few years ago, it appointed Carat to handle its &£20m media buying account, also managing to save considerable sums by cutting out the COI’s commission of about 1.5 per cent and securing better rates according to some sources.

But the worries of Home Office deputy director and head of marketing and strategic communications Anne Nash, who has been taking a close interest in the recent pitches for the COI’s agency roster, may soon be quashed. The COI this week decided to appoint Carat to handle its &£69m TV buying account in place of incumbent Starcom Mediavest, after a long pitch that also involved MediaCom and Zenith Optimedia.

As a consequence, the DfT has said that it will return to the COI, but only “subject to satisfactory terms and conditions”. These will no doubt include the COI’s 1.5 per cent commission rate and staffing levels. Only last week a DfT insider said: “The DfT would return to the COI only if we are satisfied with the value the COI secures in its media repitch.”

If the Home Office also falls into line and continues to use the COI, then any attempts by COI chief executive Alan Bishop to foster “good relationships” with all Whitehall departments will have paid off.

In contrast to his outspoken predecessor Carol Fisher, Bishop, who joined the COI in January 2003 (after the DfT defected), has tried to win favour with government departments, leaving the COI’s relationship with roster agencies to his deputy, Peter Buchanan. Soon after his arrival at the COI, Bishop, a former chairman of Saatchi &amp; Saatchi New York, agreed to overhaul procedures in order to improve the service delivered to government departments and to drive a much harder bargain on media buying in order to appease the DfT.

The Cabinet Office also instructed the Advisory Committee on Advertising (ACA), an independent monitoring body, to undertake an audit of the DfT’s alternative agency arrangements. The results were never made public – to help protect the Government’s negotiating position with the media industry. But the ACA, which most recently appointed Procter &amp; Gamble media director Bernard Balderston to the committee, is believed to have found that the DfT did save money by cutting out the COI’s commission, but that such savings could be achieved by all Whitehall departments. It is this report that is thought to have stirred up concerns among other government departments, including the Home Office, over the COI, its commission and media buying arrangements.

One Whitehall marketer explains that the COI was set up to secure policy objectives through advertising for central government and public sector bodies. “But in the New Labour era, where most departments have their own marketing teams and hence expertise to run ad campaigns, many have begun asking themselves whether they need the COI. To top that, most departments are under increased pressure from the Government to assess their budgets; and getting rid of the COI means that the 1.5 per cent commission can be saved in one swoop,” he adds.

Any breakaway by the Home Office would, he says, have been seen as a cue for sizeable departments, such as the Department for Health and the Department of Education and Skills, to also start questioning the viability of the COI.

This would have come at a sensitive time for the Government, which has increased the role of the COI in recent years. Prior to her departure, Bishop’s predecessor Fisher was made the Government’s chief adviser on marketing communications and information campaigns with the aim of ensuring that ad campaigns dovetailed with the Government’s priorities. Bishop took on this advisory role to Number 10 when he took over from Fisher, who oversaw a tripling of the amount the Government spent on advertising to &£192m, for the year ending in the General Election in 2001.

More recently, Bishop’s role was beefed up with new powers to gather intelligence on the way in which the media and the public perceive government policy (MW last week). His new powers mean that the COI will reclaim responsibility for the Government News Network (GNN) from the Cabinet Office, where it moved four years ago.

But while the Government has been busy trying to bolster the COI’s powers, it has not reinstated the rule that all government departments must use the COI for advertising – a requirement that was removed in the Nineties.

Perhaps it thought that there was no need to. The COI should theoretically be able to secure the best value on media deals by negotiating discounts through the pooling of several departments’ budgets. But one agency source says the COI may not always offer best value: “The departments may find it beneficial to have their own media arrangements because the COI separates media planning from buying, and also uses different agencies for different media, which sometimes can work against producing the best media product.”

But another media agency chief says that although individual departments may have internal marketing teams, they lack the media expertise and traditional marketing knowledge that Bishop and his team offers. Nevertheless, one agency insider says that the COI has an obsession with “ticking boxes”, forcing agencies to endure a frustratingly slow process to make sure that campaigns are approved by the relevant ministers and advisers.

This situation has been further complicated with the government appointment last year of Howell James, said to be a close friend of Peter Mandelson, to the new position of permanent secretary for government-wide communications. James alongside the Minister for the Cabinet Office David Miliband are both responsible for the COI and the Government’s information strategy.

Another advertising executive says that COI briefs can help agencies to establish a strong creative reputation. However, he adds that with the COI acting as intermediary the agencies have to negotiate too many processes and people to get the green light for a campaign. He argues that there is a case for devolving the COI’s advertising activities to individual departments, leaving it with sole responsibility for buying media.

Former marketing director of the Inland Revenue Ian Schoolar agrees that there needs to be a debate on the future of the COI. He envisages two scenarios: one in which the government departments give up their own marketing teams and accept that the COI is given more power. And, the other, whereby the COI would exist only for the benefit of much smaller departments, such as the Met Office or the Royal Marines, which need extra resources, while the larger departments go their own way.

The latter would inevitably lead to questions about the future of the COI, while the former would let the COI operate unhindered – and leave the Government open to accusations of abuse of power through spending public money on advertising.

Bishop appears to have averted an embarrassment for the Government by preventing any more defections from the COI and securing the return of the DfT. But he will need to use all his charm if he is to protect the COI’s status as the Government’s centre of marketing excellence.