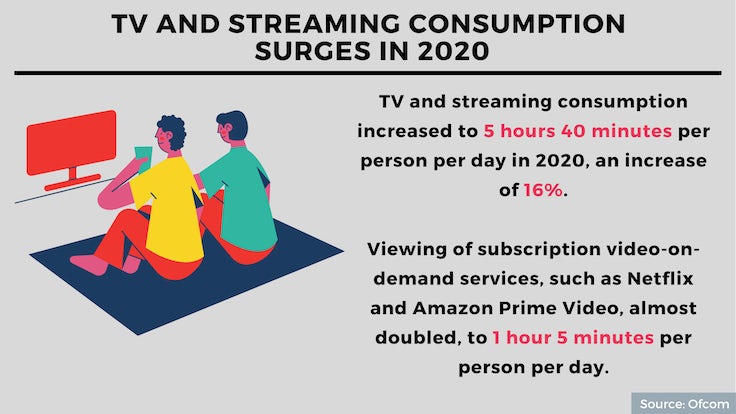 TV and streaming consumption surges in 2020

Covid-19 restrictions brought about a surge in TV and streaming consumption, rising by 47 minutes to 5 hours 40 minutes per person per day in 2020, an increase of 16%.

The Media Nations Report by Ofcom finds viewership of subscription video-on-demand (SVoD) services such as Netflix and Amazon Prime Video almost doubled in 2020, to an estimated 1 hour 5 minutes per person per day.

SVoD services were used by 60% of all UK households in the third quarter of 2020, up from 49% a year earlier, while more than 50% of UK households were subscribed to Netflix in 2020. Ofcom identifies the Covid-19 lockdown, coinciding with the launch of Disney+ in March 2020, as providing an additional boost to SVoD services.

YouTube remained the most popular user-generated online video service, with people spending an estimated 41 minutes per day viewing YouTube videos in 2020. This preference for YouTube appears to be growing, with the total number of videos viewed on the platform by UK adults up 22% in the first quarter of 2021, compared to 2020.

Ofcom says UK consumers have “diversified their viewing” with new types of services such as TikTok, which reached 31% of UK adult internet users as of March 2021.

The statistics suggest TV ad revenue will rebound in 2021, although Ofcom recognises TV broadcasters are having to adapt to stay competitive. The organisation confirms that commercial TV revenues contracted during the pandemic, declining 6.4% to £10.2bn in 2020, although the continued growth of online video has somewhat offset these losses.

Ofcom highlights the fact commercial TV broadcasters have invested in new technologies and initiatives to drive advertising growth from their broadcaster video-on-demand (BVoD) services and make better use of data, including via improved cross-media measurement, programmatic ad tech and addressable advertising. 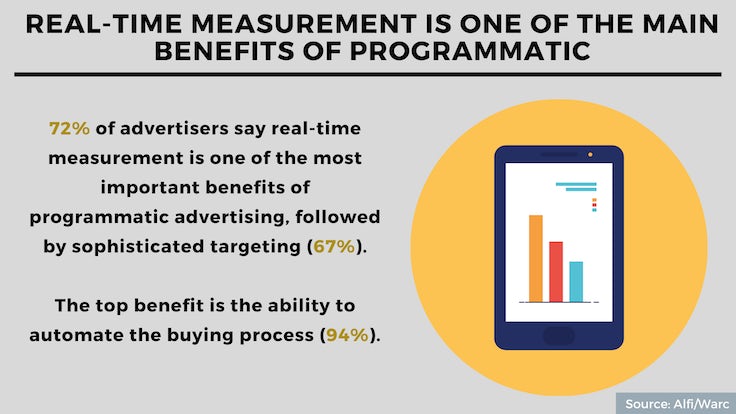 Nearly three-quarters (72%) of advertisers say real-time measurement is one of the most important benefits of programmatic advertising. This is closely followed by sophisticated targeting, which was highlighted by 67% of advertisers.

However, perhaps unsurprisingly, the top benefit of programmatic advertising is the ability to automate the buying process, as cited by 94% of advertisers.

Return on ad spend (46%) and campaign management at scale (21%) were also listed as important benefits, but these was singled out by far fewer advertisers. 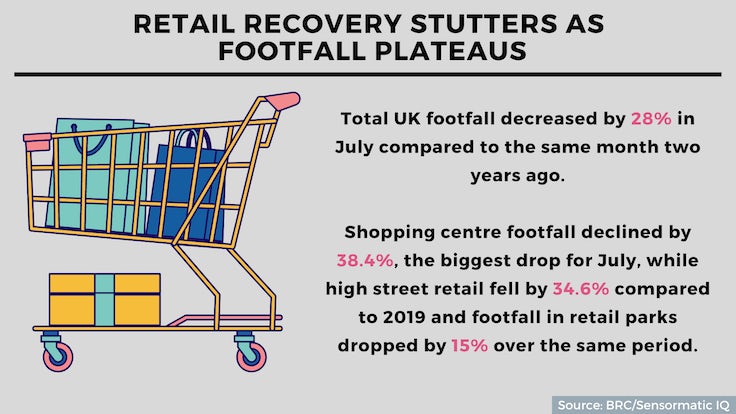 Improvement in UK footfall has stalled, with little change recorded for the past three months following the initial boost seen when restrictions began to ease.

Total UK footfall decreased by 28% in July compared to the same month two years ago, according to the latest BRC-Sensormatic IQ Footfall Monitor. Total footfall is down 0.4% percentage points on June.

Helen Dickinson, CEO of British Retail Consortium, says: “The turbulent weather, with initial heatwaves giving over to torrential rain, appears to have dampened the mood for shopping in July, with a particularly pronounced fall in footfall at retail parks.

“However, the last week of July offered a glimmer of hope for retailers as the easing of restrictions lead to the best weekly performance of 2021. Retailers hope this trend will continue as the rise of vaccinations and falling coronavirus case numbers boosts consumer confidence.” 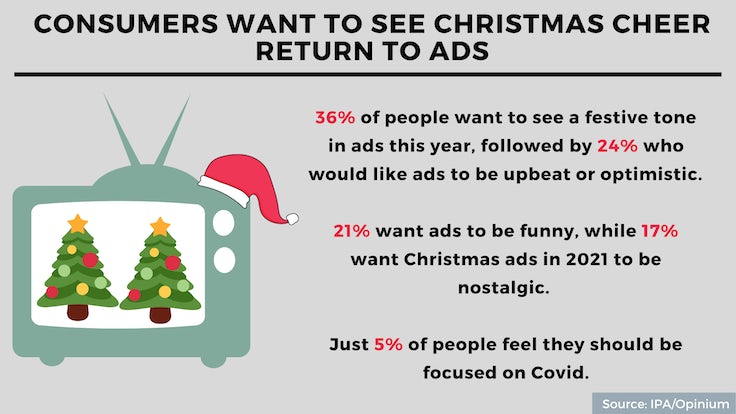 Consumers are ready for the return of festive cheer in advertising this Christmas, after a relatively subdued offering in 2020 as a result of the pandemic.

More than a third (36%) of people want to see a festive tone in ads this year, followed by a quarter of people (24%) who would like ads to be upbeat or optimistic. A fifth (21%) want ads to be funny, while 17% want Christmas ads in 2021 to be nostalgic. Just 5% of people feel they should be focused on Covid.

After missing out last year, 52% of UK adults plan make the most of it this year, with 51% hoping to eat out, go shopping and visit attractions this Christmas, rising to 72% among 18- to 24-year-olds. Just under half (45%) of UK adults also plan to see more of friends and family than they normally would.

Meanwhile, the study also shows online grocery delivery services are likely to be more popular among men (26%) than women (15%), with Londoners (35%) and those aged 18 to 34 (39%) most likely to use this kind of service. 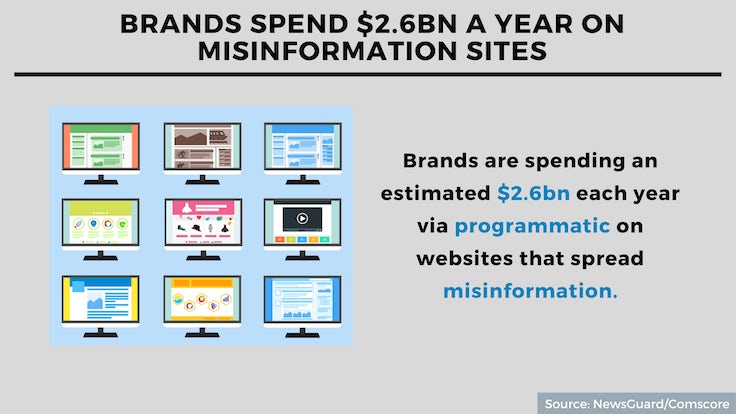 Brands are spending an estimated $2.6bn each year via programmatic on websites that spread misinformation. This includes hundreds of millions of revenue supporting sites that publish false health claims, anti-vaccine propaganda, election misinformation and other fake news.

A sample of 7,500 sites were analysed, with 1.68% of display ad spending found to support sites spreading fake information.

The global programmatic advertising industry is worth $155bn, which equates to an estimated $2.6bn per year.

The problem is most prevalent in the US, where it is estimated for every $2.16 of digital ad spend sent to legitimate news sites, $1 is sent to sites spreading misinformation.

From Greggs’ return to growth and Domino’s doubling profits to McDonald’s resurrecting the “critical” UK CMO role, catch up on this week’s biggest marketing news.