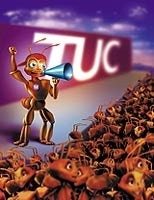 Trade unions may one day look back on the summer of 2001 as a watershed in their recent history. Last week, the GMB decided to dock &£1m from its donations to the Labour Party over the next four years in protest at the Government’s plans to extend private sector control of public services. The money will be used to fund a publicity campaign backing public-sector values. Other unions look set to follow suit. The Fire Brigades Union has already said that it will look at diverting funding into other political parties.

For the first time in many years, the unions are rediscovering some of the campaigning zeal that led to their establishment in the 19th century. By the end of last week, they were attacking Government plans to force sacked workers to pay a fee to take their ex-employers to an employment tribunal.

The unions have scored successes since Labour’s return to power in 1997, with the introduction of the minimum wage and new union-friendly legislation. And for the first time in 20 years, the unions appear to have stemmed the decline in their membership. Total membership has risen to about 7.3 million – a 100,000 rise over last year – following the loss of more than 5 million members over the past two decades.

The battle to recruit more members and re-establish the popularity of the union movement is the subject of a “task group” headed by Bill Morris, president of the Trades Union Congress and general secretary of the Transport and General Workers’ Union (TGWU).

Unions find themselves in a position familiar to anyone involved in marketing whisky, pensions, cigars, Marks &amp; Spencer or ITV. They need to attract more young people, but young people perceive them as outdated and irrelevant – or even worse, they don’t have any perception of them at all. ITV has scored some success targeting youth with Popstars, and has hired a youthful marketing director in Jim Hytner. But attempts over the past ten years to give whisky youth appeal have fallen flat. Meanwhile pensions remain a big turn-off, and M&S is still having difficulty appealing to the young.

The average age of trade union members is 46 and many – especially the young – see unions as a hangover from a long-gone industrial past.

The TUC announced last week that it would take radical steps to revamp its image and “promote union membership and values to the modern world of work”. The body has hired advertising veteran Leslie Butterfield, formerly of Partners BDDH, now head of his own consultancy Butterfield8, to find ways of making trade unions appear relevant again and stem their long-term contraction.

TUC head of campaigns and communications Nigel Stanley says: “We want to improve union membership in a range of sectors. We’re targeting non-union members, particularly young people and students, and we want to reach people at work through the Internet.”

The TUC is to create two new Internet brands offering information and advice aimed at young professionals and service workers. It will link up with the National Union of Students (NUS) to promote trade union membership to students and graduates. In what may be a controversial move within the labour movement, the websites will feature cross-promotions with brand owners.

The plan is to shift perceptions of trade unions away from images of militancy and to “rebrand” unionism. This will involve creating an advisory service on the Web covering work issues, with advice about careers, finances, pensions and even about taking time out for travel or study, the so-called “work/life balance”. There are also plans to offer credit for students, and to find ways of helping to repay the considerable debts they build up while studying.

Butterfield says: “If you turn on the television you see programmes about gardening, about the home, about money and sex. But do you ever see a programme about work? It’s the thing we do most, but work becomes something taken for granted. If you can help people become happier at work, that makes a difference.”

The recasting of unions to emphasise their expertise in work issues will be aided, Butterfield believes, by the innate sense of trust that many people have in trade unions. They will be able to offer impartial pensions advice and extend their role from just concentrating on increasing wages and maintaining jobs to enabling people to get on better in life.

“If you are rich and you have a problem with your employer, you go to a lawyer. But where do you go if you are not rich? To your union,” he says.

Butterfield insists trade unionism is a “brand” like any other. He describes it as “a force in society that represents the dignity of working people.”

He says the brand has been sullied by inaccurate stereotypes of militancy left over from the 1984 miners’ strike.

But if it is a brand, trade unionism appears to have lost some of its essence. Coca-Cola quenches your thirst, Persil washes whiter, what do trade unions do? Surely the purpose of joining a trade union is that your wages will increase and your job will be secured – neither of which are generally true, or perceived as true these days.

They shall not be moved

Youth marketing agency Iris has carried out extensive research into the attitudes of young people and students in recent years. Managing partner Ian Millner says: “Young people have changed a lot in the past 15 years. They do not have the relationship to jobs that previous generations had. They despise work. They do it for money, but they don’t take it seriously.”

Millner says it is not until people settle down and have children that they start worrying about careers and pensions. Many students go to university to put off work for as long as possible, and when they leave they work briefly to fund foreign travel, he says.

Trade unions are considered to be a left-over from a polluting, industrial era, he adds. And they are now perceived as powerless organisations. Last week’s Genoa summit showed the willingness of youth to protest against multinational corporations and the globalisation of the economy. But even though unions were involved in the protests, they are often seen as adjuncts to the entrenched institutions rather than as campaigners for a better world.

But he agrees that trade unions need to have a wider remit than just work issues. “Trade unions have lost their broader campaigning edge in recent years. There’s a shared agenda between the trade union movement and other single-issue groups such as the Greens,” he says.

Doner Cardwell Hawkins creative director Paul Cardwell, a former trade union speech writer, says that while unions should do “worthy stuff” like giving work advice, they also need to create excitement and get back to their origins.

“The shop steward used to be a friend who would help workers solve problems – he was just as likely to give you a racing tip as to help you with a work problem – but that warmth seems to have gone. Unions were a laugh, they were friendly, uplifting and worthwhile,” he says.

The Internet sites will probably be of interest to those who are inclined towards unions anyway, but will fail to persuade new people to join. “The unions need to do something which is a complete shock,” says Cardwell. He suggests they need a media-friendly celebrity spokesman, with a personality that can connect with ordinary people.

The disappearance of manufacturing industry, and Conservative legislation throughout the Eighties aimed at reducing the power of unions were largely to blame for the decline. But with new legislation giving all workers the right to vote on whether they want a union to be recognised by management, unions are battling again for the hearts and minds of people at work.

The 1999 Employment Relations Act has led to an increase in voluntary recognition by employers, but very few cases have had to be enforced. Clearly trade unions need to restate their case if they are to exploit the new laws to radically improve membership. They need to recruit up to 500,000 new members a year just to replace those dropping out. This is a huge churn rate.

New Labour reinvented itself by recognising that political parties, like brands, represent a general point of view and attitude to life as much as a set of policies. The success of the Green movement over the past 20 years – in inverse proportion to the decline of trade unionism – could provide a lesson. The Greens have married complex chemistry with apocalyptic predictions of world destruction. They combine the specifics of carbon emissions with sometimes vague notions of making the world a “nicer” place. If trade unionism is a brand, it needs to exploit wider ideological issues as well as focusing on the intricacies of labour law.

By recasting the TUC as a sort of glorified work advisory service, there is a risk that it could be perceived as one of those brands which cater for the boring, though crucially important, things in life such as pensions. Unions would resemble Centrica or Prudential rather than youth-oriented brands such as Virgin, French Connection or easyJet.

Superficially rebellious and anti-establishment, these brands claim to challenge vested interests. They mount court cases and campaigns and protests against “big” organisations (be it BA, Luton Airport or the Advertising Standards Authority). They are irreverent and claim to stick up for the individual against the establishment. In short, they use the very tactics trade unions have employed throughout their history.

The TUC’s Nigel Stanley accepts that trade unions could do more broad social campaigning, though he points to recent anti-racist festivals organised by unions, which have attracted over 100,000 people. “To say unions do not do any campaigning is unfair. To say we could do more is probably true,” he says.

Perhaps dropping the political link with New Labour could turn out to be a positive move, with Blair looking increasingly trapped in an outdated Eighties agenda of bashing public services. The unions have 7 million members, while Tesco has 9 million shoppers. Yet just 10 million people voted for Labour in the last election.

It’s amazing what you can pick up at a post office. In less time than it takes to lick a stamp, Consignia is already diversifying into bizarre areas, following its debut as the newly reincarnated Post Office. The company has sealed a deal with Figleaves.com and will now be stocking – well, stockings, knickers and […]

It’s amazing what you can pick up at a post office. In less time than it takes to lick a stamp, Consignia is already diversifying into bizarre areas, following its debut as the newly reincarnated Post Office. The company has sealed a deal with Figleaves.com and will now be stocking – well, stockings, knickers and […]

The Evian Ladies European Golf Tour has appointed Robin Gibson as its commercial director. Gibson, who joined two weeks ago following a stint as European marketing manager for Taylor Made Adidas Golf, replaces Richard Masters who joined the Football League earlier this year. Gibson says he plans to make golf the “top European sport for […]