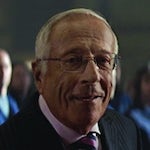 Cider brand Strongbow is launching the latest installment of its banker bashing campaign with a new viral which ties in with the launch of Oliver Stone’s new film Wall Street: Money Never Sleeps.

Created by St Luke’s, the viral, which will be screened in cinemas showing the film, goes live on September 3 and continues with Strongbow’s “Bowtime. Hard earned” strategy.

This positions the cider brand as a reward to workers for a hard day’s graft. In previous executions, ordinary workers have expressed their disgust at the behaviour of the bankers, in one telling them to “sod off”.

The latest ad opens with the familiar Master of Ceremonies from the previous execution continuing the roll call of workers who have grafted hard.

He commends a group that have “suffered the storm and faced unwarranted criticism, but ended up bringing success on themselves” before stopping in mid-sentence when he realises he is commending the Bankers of the City of London.

The assembled crowd is seen folding their arms in disgust while the barmaid glares at the bankers and covers up the Strongbow bar tap.

Creative director Al Young says: “The bumper profits reaped by the banking centre has ensured this story just runs and runs.” Strongbow brand manager at owner Heineken Lucy Henderson adds: “The fact that it will be shown before the new Wall Street, a film about greed in the city, will heighten its relevance and, we hope, the enjoyment of cinema audiences.