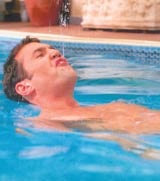 Cider brand Strongbow is parting company with long-time advertising front-man Johnny Vaughan and refocusing on the product’s benefits in a £10m campaign set to break this summer.

Vaughan has appeared in Strongbow’s advertising since May 1998, when the first “Strongbow. Live to loaf” ads were aired. The campaign, created by GGT (now TBWA/London), focused on Vaughan’s character, who was always finding new ways to get the most out of life with the minimum effort. Vaughan has been credited by Bulmers with giving credibility to the Strongbow brand among the key 18to 24-year-old group in a generally depressed cider market. AC Nielsen figures show that Strongbow has moved up to eighth position in the long alcoholic drinks sector, which comprises ciders, lagers and ales.

Other Bulmers’ brands have not fared so well, however, and the company has faced strong competition in the US and Australian markets from ready-to-drink products (RTDs) such as Smirnoff Ice. Bulmers is understood to be pinning its hopes on new products such as Bambao, an RTD which launches later this year with a £6.5m marketing budget (MW April 25), and Storm, a two-coloured “widget-based” RTD.