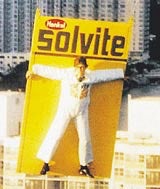 Some things are just wrong. Nonetheless, people still do them. Some people drink fizzy pop before lunchtime, for instance, or wear corduroy. Or take this man. He’s called Bill Weston, and in 1978 he volunteered (presumably in exchange for money) to be glued to a board and hoisted above the Miami skyline as an ad for Solvite.

Stupid enough, you may think, but glutton-for-punishment Weston obviously didn’t. Now, aged 63, he has recreated his stunt for a new advertising campaign. The Diary feels that it should be broadcast as a public information campaign, as it is obvious that getting high with glue is addictive.