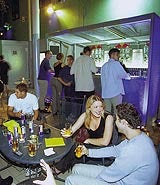 The National Union of Students (NUS) is trialling branded kiosks in students bars and has signed up Red Bull and Bacardi as its first partners.

A roll-out of branded kiosks selling drinks brands is planned for the union’s 250 UK bars and the idea may be extended to food outlets.

NUS Services, the commercial arm of the NUS, and local students’ unions approached Red Bull and Bacardi with the idea. The kiosks, which currently cost &£15,000 each, are funded by the brand and it is hoped the price will be reduced with a large-scale roll out.

The first trial, a Red Bull kiosk which also sells vodka, opened at Loughborough university students’ union on October 11. It created an estimated &£18,000 uplift in Red Bull sales within the first two weeks.

The second trial, at Leicester university, will be a Bacardi kiosk selling the pre-mixed drink Metz. It will include the refit of an adjoining seating area as a “chill-out zone”.

NUS Services marketing manager Nick Emms says: “This is likely to form a big part of our future strategy. Student union bars are busy on Fridays and Saturdays – the kiosks help us to serve more people, provide brands with the opportunity to be creative with the environment, build a strong relationship with their target market and drive sales.”

Emms adds that NUS Services will approach companies including Anheuser-Busch, Bass and Scottish Courage with the idea. Food companies may be approached to provide snacks from similar kiosks.