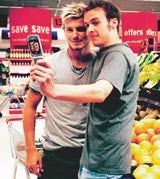 The global sponsorship market has increased by 220 per cent over the past ten years and now accounts for $25bn (&£16bn) of all marketing expenditure worldwide. But according to a new study, sponsorship campaigns are more likely to be successful if they are linked to a good cause. Research by Mediaedge:CIA’s MediaLab shows that UK consumers rate cause-related sponsorships higher than event, sports and TV sponsorship, when questioned about the perceived effectiveness of different sponsorship techniques.

The study polled consumers in 20 countries and examined consumer attitudes to the sponsorship of global events, sports properties (events and individuals), TV programmes and good causes.

The growth of sponsorship has, in part, been driven by the declining effectiveness of traditional advertising media (especially television) because of excessive commercial clutter. Yet, ironically, the sponsorship industry seems to be facing similar challenges, with almost half of the people surveyed (46 per cent) believing that global events are far too heavily sponsored, rising to 50 per cent in the case of sports properties and TV programmes.

But the research also suggests that, despite growing concerns over sponsorship clutter, the discipline continues to deliver in terms of its ability to raise awareness and influence consumer attitudes towards brands.

More than 50 per cent of those questioned notice companies and products that sponsor good causes, compared to 45 per cent who recognise the sponsorship of global events. Even more significantly, when asked whether they agree with the statement “companies and products that sponsor events or causes are of high quality”, the results are extremely positive for all forms of sponsorship, with the exception of television sponsorship. Only 37 per cent of consumers agree that products or companies sponsoring TV programmes are of high quality. MediaLab suspects the relatively poor performance of television sponsorship represents a reaction against the high level of sponsorship and promotional clutter on TV.

Sponsorship also appears to have a reasonable influence on consumers’ intentions to purchase – 56 per cent of consumers would like to buy the products of companies and brands that sponsor good causes, though only 27 per cent say the same for companies sponsoring TV programmes, and 28 per cent for those sponsoring sports properties.

However, the researchers advise that these figures be treated with caution, since intention to purchase can be very different from actual purchasing behaviour. Nevertheless, the popularity of cause-related marketing – often involving a sponsorship element – suggests that such initiatives can be of significant commercial value.

For brand owners planning multi-market sponsorship initiatives, the significant differences between consumer attitudes to sponsorship in different counties create some interesting challenges. The patterns can be difficult to interpret, according to MediaLab, but in general, Northern Europeans, particularly Germans and Scandinavians are less positive about commercial sponsorship than people in the UK and North America.

Cause-related initiatives appear to be very popular in Spain and Latin America but less so in Germany and the Nordic markets. Television sponsorship clutter appears to be a significant problem in Southern Europe (Spain and Italy), with twice as many people agreeing with the statement that TV “is far too heavily sponsored”, compared with the UK market.

Sponsorship of sports teams and individuals consistently performs well across the globe in terms of awareness and favourable perceptions. There is also a close relationship between a sponsor being noticed and a sponsoring brand being of high quality. It is believed this is because consumers are transferring their positive emotions for the property being sponsored onto the brand sponsoring it. The only countries that fall below 40 per cent in terms of awareness or high quality are the Nordic regions (excluding Finland), Germany, Poland and Hong Kong.

Sponsoring sports teams and individuals appears to be most successful within the Americas. Brazil and Mexico have by far the highest global scores in all areas, and feature a very strong “inclination to buy”. In the US and Canada there is little or no difference between awareness and high quality, with figures indicating favourable perceptions towards this type of sponsorship, although the numbers intending to buy drop in a similar way to European countries.

It is true that the sponsorship industry is facing challenges from increasing levels of clutter and intrusion which are turning consumers off, but sponsorship still has the ability to raise awareness and influence consumer attitudes. As long as there are fans, affinity groups and clear brand associations, sponsorship will remain an effective marketing tool.