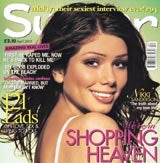 Sugar, the monthly magazine for teenagers, has briefed four advertising agencies to develop a press campaign for its anti-bullying and domestic violence campaign, Stand Up Speak Out.

The campaign is part of a scheme run by the Children Safety Education Campaign and is backed by the NSPCC’s Full Stop campaign, which aims to protect children from abuse.

The Hachette Filipacchi-owned magazine has asked Karmarama, WCRS, Hooper Galton and Fallon to produce an ad encouraging girls to speak out against bullying in schools, and domestic violence. The four executions will then be printed in the magazine and readers will vote for the one that should be used for the campaign.

It is understood that the agencies have submitted their work and the ads will be shown in the next couple of weeks. The winning execution will be used as a poster campaign in schools.

Hachette Filipacchi appointed Fallon as its creative agency and Mediaedge:CIA to handle media a year ago as part of an effort to increase sales of its key titles, such as Sugar, B and Elle.