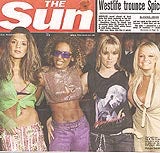 The last time The Sun embarked on a major branding campaign was in 1998 under then marketing director Ellis Watson.

One story-board idea for the campaign is understood to show Robbie Williams pursued by paparazzi and turning round to say “The Sun – I love it”.

Another, with a sport-led theme, is understood to show Manchester United’s Teddy Sherringham with the head-line “Teddy’s ready”, followed by Arsenal’s Martin Keown in a two-fingered salute and then Chelsea’s Dennis Wise with the words “we love it”.

The Sun’s creative agency, TBWA London, put the ideas to mixed gender focus groups, one aged 30-35, the other below 25. They were asked to give their opinions on whether the celebrities fitted with the tabloid’s image.

Other ideas for poster and TV campaigns were also put before the focus groups, including one to advertise a scratch card game understood to use the line “Live life in The Sun”.

Another idea is understood to have used the newspaper’s front page as inspiration using the red masthead “The Sun” followed by the words “in short, life” in normal typeface.

It is thought that some of the ideas, which adopt the visual style and the short snappy language of the tabloid, will not see the light of day for another six months.

Canning was unavailable for comment as Marketing Week went to press.