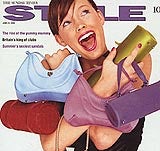 The Sunday Times is revamping its Style magazine supplement for a relaunch at the end of July, in a bid to attract more display advertising.

Observers say that the changes are not necessarily an attempt to compete directly with The Mail on Sunday’s You magazine. One insider says that The Sunday Times is positioned too far upmarket for the publications to be chasing the same advertising clients.