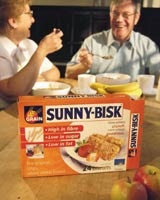 Sunny Bisk, the wheat biscuit cereal owned by Grain Health Foods, is relaunching. The revamped breakfast cereal will be supported by a £2m advertising campaign.

The product, which was originally launched in 1933, will have new packaging and will be aimed at older consumers, as Grain Health believes that market is largely ignored by existing cereal manufacturers. The market is led by Weetabix.

The move is supported by a tie-up with Help the Aged, whose logo will appear on the pack. Grain Health will also donate five per cent of retail sales to the charity.

Grain Health chief executive Alk Brand says that Sunny Bisk is being relaunched because it has a low profile in the UK – despite being the first wheat biscuit cereal to be launched here. The product is better known in Australia and South Africa, where is has received more marketing support.

There will be both an above- and a below-the-line campaign, which will be the first consumer advertising the brand has done in the UK. Brand says that he is planning to start with a print campaign rather than use television. He is also trying to improve the cereal’s distribution. It is already available in Tesco, Sainsbury’s and Somerfield and he says that he is close to signing deals with two other major retailers.